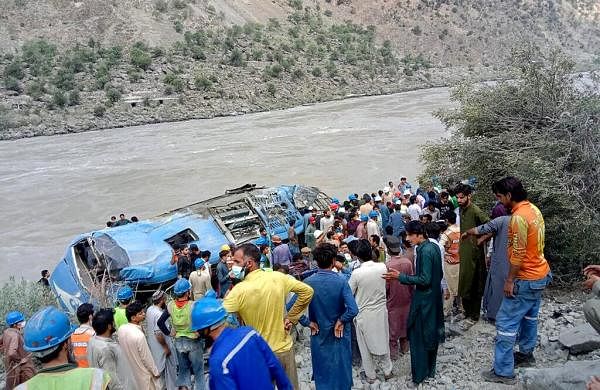 LAHORE: Pakistan’s law enforcement agencies on Wednesday arrested two suspects in connection with a recent bomb attack on a shuttle bus in the country’s northwest that killed 13 people, including nine Chinese engineers, and claimed that they have established a “common link” between the incident and the blast outside the house of JuD leader Hafiz Saeed here.

The bomb targeted the bus carrying Chinese engineers at Dasu area of Upper Kohistan district of Khyber Pakhtunkhwa province where a Chinese company is building a 4,300-megawatt hydropower project on the Indus river.

“Two suspects, who are brothers, have been arrested in connection with the Dasu bus attack. They are from Quetta, Balochistan,” Counter Terrorism Department (CTD) of Punjab police said in a statement here.

Both suspects have been arrested from Lahore, it said.

The suspects had been living in Lahore for the last 15 years, the statement said, adding that “a common link” is established between the Dasu bus attack and blast outside Jamaat-ud-Dawa chief and Mumbai terror attack mastermind Saeed in Lahore.

It said further investigation is underway.

Three persons were killed and 24 others injured when a powerful car bomb exploded outside Saeed’s residence at the Board of Revenue Housing Society in Johar Town in Lahore on June 23.

Pakistan’s National Security Advisor Moeed Yusuf had claimed that the mastermind of the Lahore attack “is an Indian citizen”, a charge dismissed by India as “baseless propaganda”.

China, which had declared it a “bomb attack”, rushed a cross-departmental joint working group to Pakistan to help with relevant work.

“No effort will be spared to find out what happened, conduct in-depth assessment of security risks, and do our utmost to ensure the safety of Chinese personnel, Chinese foreign ministry spokesman Zhao Lijian had said.

The Dasu bus blast had accentuated Beijing’s concerns as thousands of Chinese personnel work in the USD 60 billion China-Pakistan installations, projects and personnel in Pakistan.

Initially, Pakistan’s Foreign Office had blamed “leakage of gas” caused by a mechanical failure for the blast on the bus carrying about Chinese workers from the workers’ camp to the under-construction tunnel site of the Dasu hydropower project in Upper Kohistan, Khyber Pakhtunkhwa.

The bus fell into the ravine after the blast.