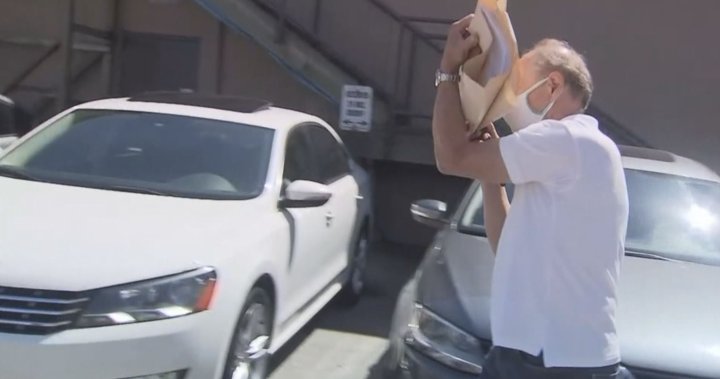 WARNING: This story contains some details readers could find disturbing.

Members of a group that fights anti-Asian hate rallied outside the provincial courthouse in Richmond on Wednesday and were confronted by a man at the centre of an alleged racist incident that took place at a Steveston coffee shop earlier this year.

The accused, Michel Jean-Jacque Berthiaume, had just left the building after appearing on a mischief charge when he was confronted by protesters.

“You brought the coronavirus to this country and you’re killing our people,” Berthiaume told the protesters.

“I prefer to have English or French or German than have Chinese in this country.”

Berthiaume was in court in relation to a March 29 incident at Rocanini Coffee Roasters in Steveston. A portion of the incident was captured on security video. It shows a man pouring a drink on the floor and a woman hurling the contents of a cup at a Steveston coffee shop manager.

The pair allegedly used anti-Asian slurs as they were asked to leave.

Astrid Maria Secreve is also charged with mischief. If convicted, the maximum punishment under Canadian law is just under two years in jail and or a $5,000 fine.

“Such behaviour will not be (tolerated) in our community,” he said.