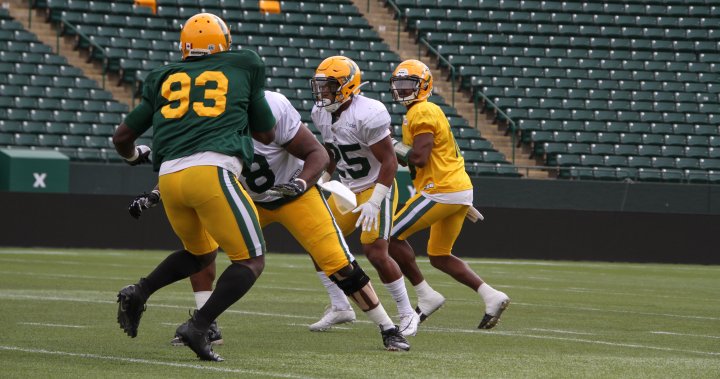 There’s only a couple of days of training camp remaining for the Edmonton Elks before they, along with the other CFL teams, need to submit their final roster cuts to the league office by 8 p.m. Edmonton time on Friday.

Since Sunday’s scrimmage, head coach and offensive coordinator Jamie Elizondo has emphasized the need for greater execution and attention to detail from his offence.

About his defence, Elizondo has given them praise but has spent most of his time focusing on the offence.

Defensive end Kwaku Boateng is quite used this type of messaging from his head coach, as he played under Jason Maas from 2017 to 2019, who was also the play-caller on offence.

“Funny enough, I’m used to having offensive-minded coaches as the head coach — right from Laurier to the Maas era and now with Coach E,” Boateng said.

“So it is what it is, at the end of the day, as I go through the process I realize the defence is able to click a lot faster throughout training camp than offence.”

Noel Thorpe is the defensive coordinator and is also the team’s assistant head coach. He has to balance being pleased with his defence when they have a better day than Elizondo’s offence but also has to see the concerns his head coach has.

“Obviously we’re united in how we see it,” Thorpe said. “The flip-side of that is I will say: ‘Look how great the offence played and defensively we got to pick it up.’ It does work both ways.”

Thope and Elizondo say they are competitive not only on the field but in the meeting room, looking to design plays to best the other in practice.

Elizondo says he makes a point of praising his defence when they have had a better day than the offence. He says also having an offensive perspective with Thorpe helps in assisting with defensive game plans.

“I think that’s been a good part of it for me but (the defence), they’ve been really good. They are the tone-setters for the team and always have been.”

Morgan has seen most his time at middle linebacker during camp but lined up as the short-side linebacker beside Bierria pushing regular starter Vontae Diggs to the second unit.

Darius Williams filled in for Brian Walker at wide-side linebacker as Walker was talking a rest day.

Noel Thorpe says the young linebackers are making their case to the coaching staff for jobs.

“First-off, they’re physical. These guys are thumpers and they have the ability to run to the football,” Thorpe said.

“They have a high football IQ and that’s what we demand out of that position.

“When you talk about the MIKE (middle linebacker) position, you have to get guys lined up, making formation checks, and getting the defence lined up. The WIL (short-side linebacker) spot is a dynamic position for us so that’s a spot we’re really looking at seeing talent-wise what we can fit in that position.”