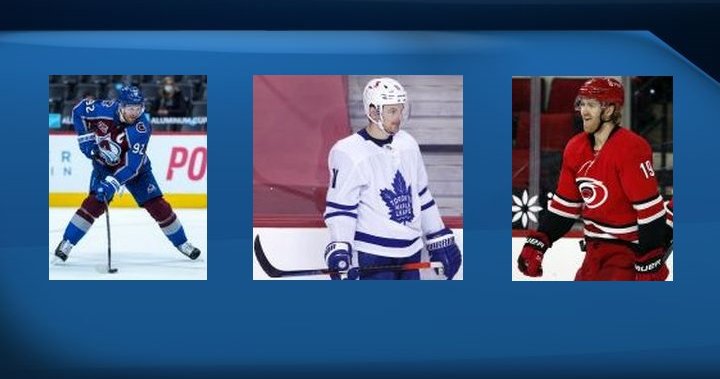 A wild off-season continues for NHL general managers this week as they hunt for deals on the free agent market.

From veteran goaltenders to burly defenceman and celebrated snipers, several big talents are poised to be on the move as teams continue to struggle with salary crunches amid the league’s flat cap.

Here’s a look at some of the players who’ll be up for grabs when the NHL’s free agent market opens on Wednesday.

A nagging lower-body injury limited Frederik Andersen’s playing time for the Toronto Maple Leafs last season — and gave Jack Campbell the chance to steal the position of No. 1 netminder.

Now Andersen, 31, could be looking for a fresh start.

Last season saw the six-foot-four, 238-pound Danish goalie post a disappointing 13-8-3 record with a .895 save percentage. It was a stark departure from the 2017-18 season where he led the Leafs to the playoffs with a career-high 38 wins and a solid .918 save percentage.

Andersen signed a five-year, US$25-million with Toronto back in 2016.

Watch below: Some recent video about the Toronto Maple Leafs here.

He’s helped bring two Stanley Cups to Tampa Bay, but the cap-crunched Lightning may not be able to afford Blake Coleman much longer.

The five-foot-11, 207-pound Coleman’s three year deal came with an affordable US$1.8-million annual cap hit when the New Jersey Devils sent him to Florida at the trade deadline in 2020.

Since then, the 29-year-old forward from Plano, Texas, has been a key piece to Tampa’s lineup, registering 31 points (14 goals, 17 assists) in 55 regular-season games last year and adding 11 more (three goals, eight assists) in 23 playoff appearances.

Dougie Hamilton has said he wants to stay put.

“I have nothing bad to say about my experience here and being a Carolina Hurricane. So hopefully we can keep going,” he said after the Lightning ousted the ‘Canes from the second round of the playoffs.

Wherever he lands, the six-foot-six, 229-pound blueliner from Toronto likely won’t come cheap. Hamilton is coming off a six-year deal that had an annual cap hit of US$5.75 million.

Rumour has it that Zach Hyman has already found a new home with the Oilers, but Edmonton may be limited in what kind of deal they can sign with the 29-year-old winger.

In order to get a league-maximum eight-year contract, the Oilers would need to orchestrate a “sign-and-trade” deal with the Leafs. And Toronto general manager Kyle Dubas said that won’t happen without a “fair deal.”

“When you’re saving a team significant dollars on the salary cap, that comes with a cost. And we’re not going to bend on that,” Dubas told reporters on Saturday.

Hyman has spent his entire six-season NHL career playing in Toronto for his hometown Leafs and inked a four-year, US$9-million contract with the club in 2017.

Gabriel Landeskog has played his entire 10-season NHL career in Colorado. He’s been the Avalanche’s captain since 2012. Could he really sport a new jersey come this fall?

Still, the Avs left the 28-year-old Swede unprotected in the Seattle Kraken expansion draft and have yet to ink him to a new deal.

Landeskog is coming off a seven-year contract with an annual cap hit of US$5.57 million.

A trade from the New Jersey Devils to the New York Islanders at the trade deadline in April gave Smithtown, N.Y., native Kyle Palmieri a chance to play for his hometown team — at least temporarily.

While the 30-year-old right-winger said he “loved every second” of playing for the Isles, he hasn’t re-upped with the club, making him one of the most desirable forwards available on the market in free agency.

Palmieri’s point totals fell last season, with 21 points (10 goals, 11 assists) in 51 regular-season games but he started to bounce back during New York’s playoff run, putting up another seven goals and two assists before the Lightning eliminated the Islanders in the Stanley Cup semifinals.

Palmieri signed his last deal, a five-year contract with a US$4.65-million cap hit, with the Devils in 2016.

Just a few weeks ago, few imagined Ryan Suter would be on the free agent market this year.

The 36-year-old defenceman had four years left on his contract with the Wild when Minnesota bought him out ahead of the expansion draft earlier this month. The deal had an average annual value of US$7.54 million.

Suter has been a stalwart on Minnesota’s blue line for nine seasons but his offensive production has dipped. Last season, the six-foot-one, 205-pound defenceman put up just 19 points (three goals, 16 assists), a massive drop from the 51 points he registered in 2017-18.