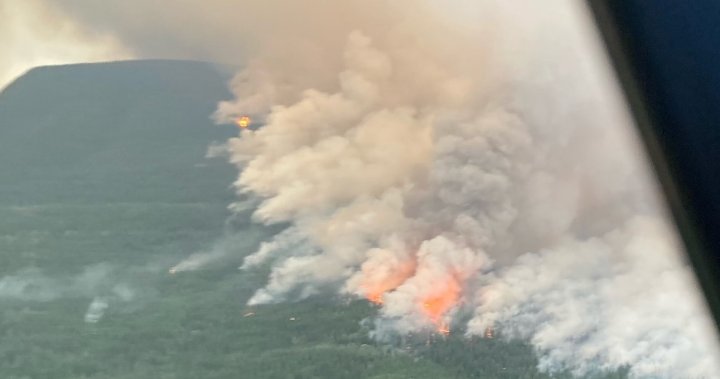 A trio of wildfires burning along Lower Arrow Lake in B.C.’s Interior have been grouped into one complex.

The Arrow Lake Complex includes the Michaud Creek, Octopus Creek and Renata Creek wildfires, and are now being overseen by one team instead of separately.

RDCK Media Release – Online public information session scheduled for Edgewood, Needles and area residents impacted by the Evacuation Order due to the Michaud Creek wildfire – July 23 at 1:00 pm. Follow the link for all the details on how to connect: https://t.co/uvh39RNIm0 pic.twitter.com/V4srYv7fKL

Read more:
Evacuation order issued for B.C. communities of Edgewood, Needles due to nearby wildfire

Combined, there are two large evacuation orders affecting the communities of Edgewood, Needles and Fauquier.

A fire information officer said the fires were 100 per cent smoked in on Saturday, resulting in good and bad news.

“And the smoke actually covers the fire, which helps decrease fire behaviour because the sun can’t affect it by heating it up.”

The downside, though is no aerial assistance until the smoke clears.

On Wednesday, the Regional District of Central Kootenay expanded its evacuation order in Electoral Area K for the Michaud Creek wildfire. The expansion included the communities of Edgewood and Needles, north to Whatshan Lake for a total of 356 properties.

Meanwhile, an evacuation alert was issued on Wednesday for the Renata Creek wildfire, which is around eight kilometres west of Renata.

And on Tuesday, an evacuation order was issued for the community of Fauquier because of the Octopus Creek wildfire.

5:09
The psychological effects of wildfire evacuations

The psychological effects of wildfire evacuations

The terrain is described as rugged and hilly, with very little access.

According to BC Wildfire, the Michaud Creek fire has seen minimal growth since Tuesday and is around 13.5 kilometres from the south edge of Edgewood.

The Octopus Creek wildfire is listed as being 11 km south of Fauquier.

On Friday, the Regional District of Central Kootenay held an online public information session. That video can be seen on the regional district’s website.

5:46
Hot, dry and windy across much of B.C. on Friday, concern remains high for residents and wildfire crews

Hot, dry and windy across much of B.C. on Friday, concern remains high for residents and wildfire crews