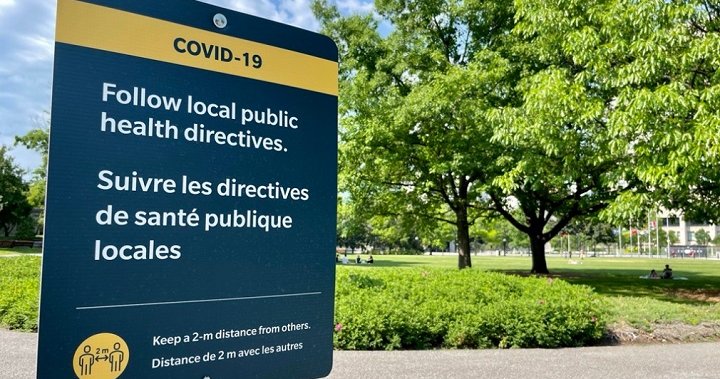 According to Sunday’s report, 48 cases were recorded in Toronto, 23 in Peel Region, and 11 in Hamilton and Durham.

All other local public health units reported 10 or fewer new cases in the provincial report.

The death toll in the province now stands at 9,313 as two new deaths were recorded.

Read more:
International passengers may now be separated based on COVID vaccination status at Pearson airport

There are more than eight million people fully immunized with two doses which is 67.7 per cent of the adult (18+) population. First dose adult coverage stands at 80.8 per cent.

Meanwhile, 538,565 Ontario residents were reported to have recovered from COVID-19, which is just over 98 per cent of known cases. Resolved cases increased by 144 from the previous day.

There were less resolved cases than new cases on Sunday.

The government said more than 13,900 tests were processed in the last 24 hours. There is currently a backlog of 3,991 tests awaiting results. A total of 16,464,927 tests have been completed since the start of the pandemic.

Test positivity jumped to 1.1 per cent on Sunday, up from 0.8 Saturday.

Variants of concern in Ontario

NOTE: It takes several days for positive COVID-19 tests to be re-examined for the exact variant. Therefore, there may be more variant cases than overall cases in daily reporting.