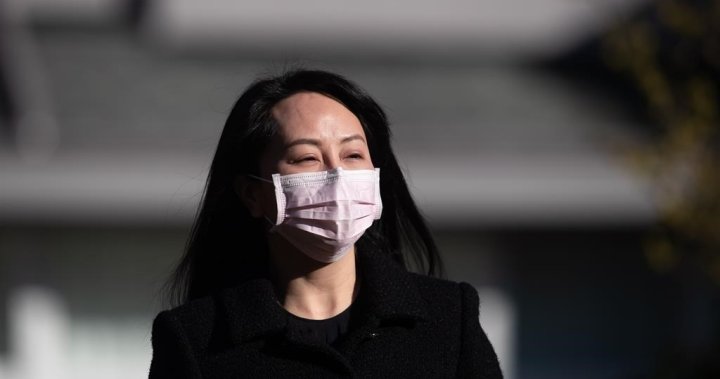 A B.C. Supreme Court judge says she won’t allow proposed new evidence in Meng Wanzhou‘s extradition case because it doesn’t “expressly” support the Huawei executive’s claim that the United States’ case against her is “manifestly unreliable.”

Associate Chief Justice Heather Holmes ruled July 9 against admitting the evidence but her reasons for the judgment were not released until Wednesday.

Meng is wanted in the United States on allegations that she misled HSBC about Huawei’s relationship with another company, putting the bank at risk of violating U.S. sanctions against Iran — charges that both she and Huawei deny.

Meng’s legal team argued that the documents undermine the allegations of fraud against Meng, proving the United States misled the court in its summary to Canada of the case against her.

The documents recently obtained by Meng’s legal team from HSBC through a court agreement in Hong Kong include internal email chains and spreadsheets.

Holmes says in the ruling that while the documents would “no doubt be valuable to Meng in a trial,” they don’t expressly state Meng’s conclusion, which can only be reached through inferences.

Read more:
‘They are in no hurry’: Beijing plays the long game as Canadians languish in China’s prisons

The documents are also not capable of showing that the inferences made by the United States in its summary of allegations against Meng were unreasonable, she says.

Holmes says that weighing competing inferences falls in the jurisdiction of a trial, not an extradition hearing.

“Competing potential inferences may or may not play an important part in the trial, where witnesses will testify and be cross-examined, and the body of evidence will be far more complete,” she writes.

“In the context of an extradition hearing, the true or most appropriate inference cannot be determined.”

The final two to three weeks of hearings in Meng’s extradition case are scheduled to begin Aug. 3.