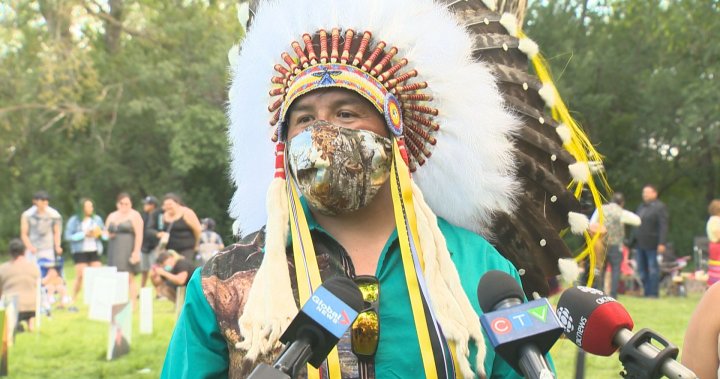 Cameron, Chief of the Federation of Sovereign Indigenous Nations (FSIN), said churches must release records directly to First Nations in order to help with the search for human remains at residential school sites.

Last Thursday, the moderator (spiritual leader) of the United Church of Canada, the Rt. Rev. Richard Bott, put out a statement saying it had released its records.

Bott said the church acknowledges “that our role in the residential school system and colonization is an abuse of power through our Christian faith.”

In an interview with Global News on Monday, Bott told Global News the church’s responsibility and Christian duty is to work towards reconciliation.

“This is about the children who died at the institutions that we ran on behalf of the Canadian government,” he said, speaking from Port Coquitlam, B.C.

“It’s our responsibility because we should have cared for them in their life.”

The United Church ran 15 residential school across Canada, including the three in Saskatchewan.

The church ran the Cote Improved Federal Day School (which replaced the Crowstand Indian Residential School in 1915) on the Cote First Nation in east Saskatchewan from 1928 until 1940.

“We are aware of cemeteries on some of these sites, and we know that there are also unmarked and likely undocumented graves of children,” the July 15 statement said.

Bott told Global News the church began releasing records to Library and Archives Canada during the Truth and Reconciliation Commission in the mid-2000s and for the Residential School Settlement shortly after that.

The July 15 statement said the church will continue to share all documents and knowledge and that it is committed to reconciliation and the Calls to Action of the Truth and Reconciliation Commission, “especially those directed to us as perpetrators.”

The United Church of Canada apologized for its role in the residential school system in 1998.

In a statement released on Monday, Cameron welcomed the church’s release of its records.

“These survivors and their families have suffered enough,” he is quoted as saying.

“They had to fight to survive, they shouldn’t have to continuing fighting for a proper apology and compensation.”

But in a phone interview with Global News, Cameron said he wasn’t aware of any residential survivor who had seen the records.

He said the FSIN had not reached out to Library and Archives Canada, a federal agency, because the bureaucracy is prohibitively time-consuming and complicated.

He renewed his call for all churches across Canada to release their records.

Global News reached out again to the United Church after speaking with Cameron.

Sara Stratton, the reconciliation and Indigenous justice animator, in an email, wrote the church is “committed to continued dialogue with Indigenous leadership and community to make those records fully accessible to them.”