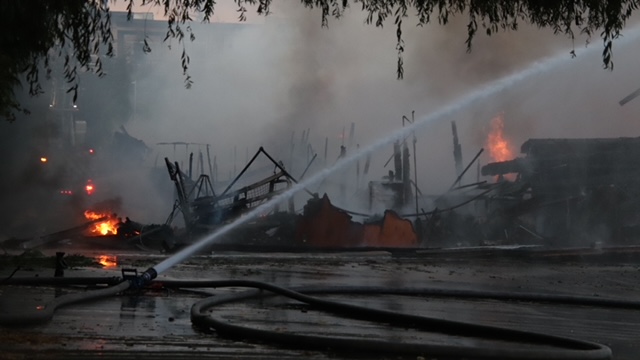 An Orthodox church has burned to the ground in Surrey after an early morning fire Monday.

The fire broke out in the early hours at the St. George Coptic Orthodox Church at the intersection of 108 Avenue and 139 Street.

Flames were seen shooting out of the roof and walls of the church and could be seen as far away as Burnaby and New Westminster.

It is not known what caused the fire to break out and there will be an investigation into what happened.

“We’ll wait until we get everything out. It will take a while with roof collapse to make sure we got all the hot spots,” Asst. Fire Chief Shelley Morris with Surrey Fire and Rescues Services said.

“Then we’ll bring investigators on the scene and see if they can determine the origin at that time.”

Nearby residents are being asked to keep their doors and windows closed due to the smoke lingering in the area.