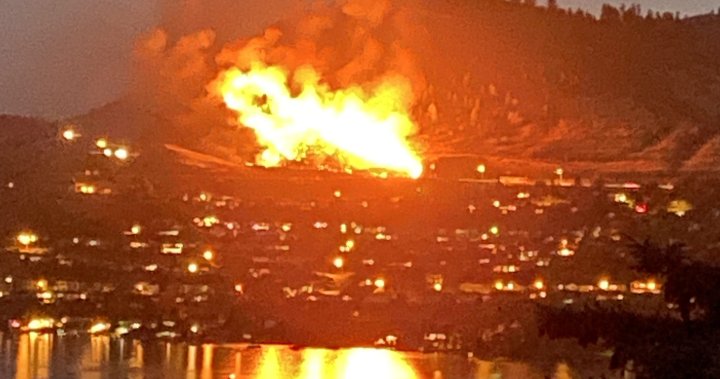 “We’re not burning anywhere near as much as we should,” said fire ecologist and noted burn boss Bob Gray, from Chilliwack, B.C., who consults for local, provincial, state and tribal governments across Canada and the United States.

B.C. should be burning tens of thousands of hectares every year to reduce dense forests packed with fallen branches and leaves, said Gray, but the Forests Ministry said it burned an average of 5,000 hectares annually from 2010 to 2019.

2:16
Calls grow for BC to declare wildfire emergency

Calls grow for BC to declare wildfire emergency

As a member of a research team with the U.S. Forest Service in Washington state, Gray has studied what forests and wildfire behaviour were like when Indigenous burning was widespread, he said in an interview.

Talking with Indigenous elders about when and where they burned, examining early aerial photographs and comparing that information with physical signs of fires on trees, reveals a “mosaic” on the landscape with smaller burned patches, meadows, larger and more widely spaced trees and diverse vegetation, he said.

Gray likened wildfire to a contagion that can be mitigated through inoculation.

“There was so much burning going on and it resulted in all kinds of different vegetation types, and many of those just didn’t carry fire very well,” he said. “And so that historic landscape was basically vaccinated against large-spread fire.”

The wildfire that destroyed most of Lytton, B.C., last month has shone a spotlight on the government’s strategies for preventing and managing increasingly intense wildfires that Gray said will only become worse with climate change.

Amy Cardinal Christianson, a fire research scientist with the Canadian Forest Service, said reducing fuel was a “perk” of Indigenous burning, but it was driven by cultural purposes — often to improve berry harvesting or hunting conditions.

Setting fire to a meadow in the early spring to burn off dead grass, for example, could produce healthy vegetation that attracted moose and other animals to the area, said Christianson, who is Métis from Treaty 8 territory in northern Alberta.

Cultural burning was a family practice, and in some Indigenous communities, fire keeping was a specific expertise and role passed through generations, she said.

Fire keepers look for cues, such as plump spruce needles or berries sprouting in spring, to determine whether it was an appropriate time to ignite a fire, she said.

Fire suppression followed settlers west, she said, and regular cultural burning was still happening in more remote areas of B.C. up until the 1950s and 1960s.

“That’s where some of the frustration is,” she said. “That we need to bring back cultural burning on a much larger scale than, you know, a burn here, there.”

Cultural burning is based on close observation and knowledge of the landscape, she said, and approval delays could mean missing a good opportunity to burn.

Some Indigenous fire keepers feel they shouldn’t have to get approval from “a colonial system,” Christianson noted. “They feel like they should be able to have their own certification within their communities, about burning.”

Russell Myers Ross echoed that sentiment. The former elected chief of the Yunesit’in Government is working to rekindle cultural burning after devastating fires swept through the Tsilhqot’in nation’s territory west of Williams Lake, B.C., in 2017.

“For me, I think the frustration is that as long as you have people that know the land really well and have experience with fire, that we shouldn’t have to go necessarily through all these hoops to try to get the credentials,” he said.

Gray said there should be a different path in B.C.’s approval system for low-risk cultural burns, such as those in the spring around riparian zones or at high elevations, where there’s still moisture in the ground.

The province has a “huge capacity issue” when it comes to funding and managing prescribed burns, Gray added, pointing to a lack of certified “burn bosses.”

Reintroducing cultural fire is identified as a priority in B.C.’s draft action plan for implementing the United Nations Declaration on the Rights of Indigenous Peoples.

The province has also partnered with the First Nations Emergency Services Society, which is working with the wildfire service to support First Nations interested or involved in cultural and prescribed burn programs, the ministry said in an email.