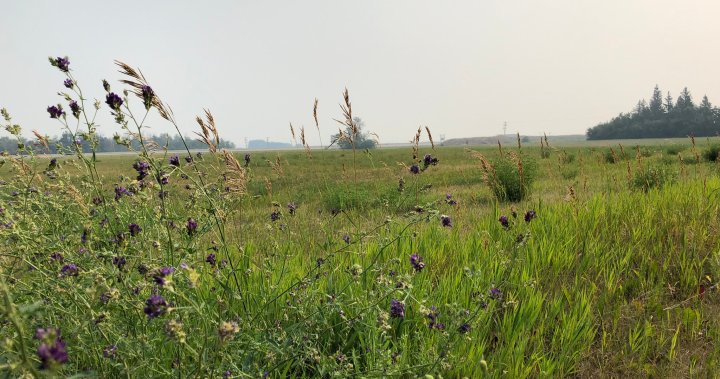 A ground penetrating radar search is being completed by SNC-Lavalin and the Battlefords Agency Tribal Chiefs Inc. (BATC) at the former site of a residential school near Delmas, Sask.

A search is underway at the site of the former Delmas #residentialschool, in Saskatchewan.
They’re looking for more remains.
An elder, Mary Fineday, says she’s lucky the school burned down before she had to attend. She says relatives said children were mistreated. pic.twitter.com/cqq9tNBSb9

The Truth and Reconciliation Commission report found the school was overcrowded and many students became sick or died of typhoid, tuberculosis, jaundice, pneumonia and other illnesses.

Neil Sasakamoose, executive director of the BATC, previously told Global News the grounds are a challenging site as the area is completely unmarked and because remains may have been moved in the past.

Karen Whitecalf, board secretary for the BATC and project lead for the residential school ground searches at Delmas and in the Battlefords, says oral history accounts have described a graveyard by the site of the former school.

That land is now privately owned, but Whitecalf says the BATC has formed a strong relationship with the property owners.

“We are just grateful they have given us this opportunity to search their land for our children,” she said.

An estimated 150,000 First Nations, Inuit and Metis children attended residential schools between the 1860s and 1996.

Elders are directing the search which began Saturday morning with a smudging of the equipment, grounds and personnel. Around 9 a.m., the SNC-Lavalin team began their search.

Noel Moosuk, an elder from Red Pheasant First Nation, was one of the first people to arrive at the site of the former residential school before the search began. He had family members who attended the school and felt it was important to be present while potential graves are being located.

“This is good,” he said. “It’s a good thing that they’re scanning these areas, gravesites, to tell the truth. The absolute truth has to come out.”

Fineday said her husband was also sent to the school, but ran away after being slapped by a nun.

Fineday never attended the residential school herself, but seeing the students left a lasting impression on her.

“I remember I used to see girls,” she said. “They used to walk two-by-two, with short hair — very short — navy blue skirts or black skirts, white blouses, white socks. They used to go two-by-two, and I used to wonder where they were going.”

Federation of Sovereign Indigenous Nations (FSIN) senator Jenny Spyglass also spoke at Saturday’s event. She was forced to attend the school when she was just three years old.

Spyglass’ four-year-old brother died at the residential school, and she’s hoping this search will find the remains of others who died there as well.

“They starved him to death,” Spyglass said about her brother’s treatment at the school.

Spyglass recalled a time where she spotted her two brothers at the school and ran across the field to see them.

“No one was going to stop me,” she said.

“I ran to my brothers. I hugged them. Just for hugging my brothers, they put me in the basement,” Spyglass said. “I didn’t know if I was going to come out.”

Spyglass said children were also punished if they spoke their own language, and she had her hair cut and clothes thrown away.

Today, Spyglass said she is proud of who she is, and she has since gained her culture back and learned her language. She turns 80 next month and is now a great-great-grandma.

The search team will examine several locations, Saturday’s search beginning with where a cemetery was believed to be located.

The public is welcome to attend the weekend search. A press release said there is a safe space for survivors to gather and therapists are onsite.

Whitecalf hopes inviting the public to attend this search will help support learning, understanding and healing.

“Our people knew that our children lay on these grounds, we always knew it,” she said. “But it was kept a secret. And what I feel is that we shouldn’t keep secrets anymore.”

Whitecalf said she is moved by the dozens of people who have chosen to come to the site to show support and pay their respects.

Storm Night, whose grandparents attended Delmas, said being present during the search is “a really intense feeling.”

“I’ve cried a lot already,” she said. “It’s a lot to understand what happened here.”

However, she said the search was needed and could offer closure to affected people and communities.

Going forward, Whitecalf said she hopes identifying the graves can be a healing experience for Indigenous communities whose children were taken to Delmas, as well as for the Town of Delmas.

“What I would love to see is maybe the First Nations and the community of Delmas come together and build a healing park or a healing garden (at this site), somewhere we could all get together,” she said.

“This is Canada’s truth. This is what we’ve lived through, like Karen said earlier, it’s a secret Canada wanted to keep buried. That’s why these graves have no markers. Those were our kids,” Lorie said.

“Sweetgrass is just right across the river. Why couldn’t the school bring our kids home?”

Little Pine First Nation Chief Wayne Semaganis has held his position for 12 years and has travelled to Ottawa for 10 years where he’s “seen nothing but neglect.”

Semaganis also touched on Pope Francis, who many have been calling on to come to Canada and apologize for the Roman Catholic Church’s role in residential schools.

“If truly he is a man of God, he will not need to be asked to come here to admit, to come and say ‘I’m sorry,’” Semaganis said.

Soup and bannock are also available for attendees.

The search will continue on Sunday as well. Organizers hope to announce their first findings as of next week.

The Indian Residential Schools Resolution Health Support Program has a hotline to help residential school survivors and their relatives suffering with trauma invoked by the recall of past abuse. The number is 1-866-925-4419.

–With files from The Canadian Press