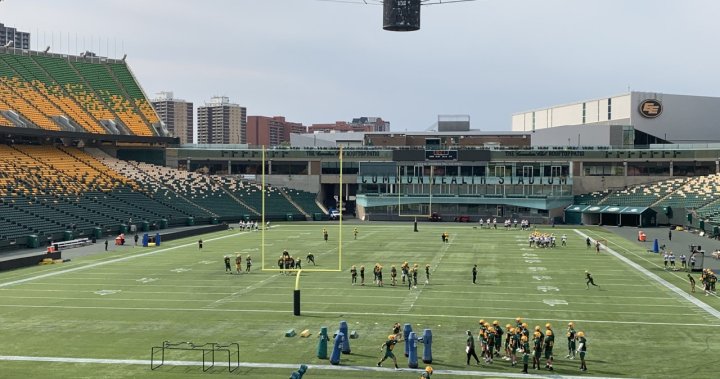 The Edmonton Elks are winding down the first week of training camp. To start the week, the injury concerns were quite minimal, but fast forward to Friday morning and the list started to grow.

Offensive lineman SirVincent Rogers, defensive tackle Jake Ceresna, defensive backs Jordan Hoover and Jonathon Mincy, along with linebacker Kevin Brown were all on the sidelines. Receivers Greg Eillinson and Armanti Edwards, along with defensive back Jermaine Gabriel were shut down before practice ended.

“The tempo we have been practising at has been really exceptional and it is around that time where the injuries start to happen,” Elizondo said.

“We’re going to evaluate as a staff in the next couple of days of what really is the most important priority.

“What happens when guys go down is other guys get more reps and then those guys, because of their workload, end up getting hurt too.”

One result of coaching staff’s evaluation is the scrimmage that was originally scheduled for Saturday morning has now been changed to a walk-through practice.

The only scrimmage in camp is scheduled for July 25. Sunday will remain an off-day for the team before returning for a full practice on Monday morning.

Drafted in the fourth round of the 2018 draft out of Concordia, Tanner Green is at his third CFL training camp. He played eight games in 2018, mostly on special teams, and then 12 games in 2019, including starting two games at full back.

With the retirement of Calvin McCarty, the full back job is open and Green hopes to take the next step in his third season.

“I’m trying not to get my expectations high.

“I’m just going to come out here bring my lunch pail and work as hard as I can for this team and whatever they want me to do, in whatever role, is what I’m going to do.”

Green, who is from Lacombe, worked as a personal trainer in Red Deer while waiting for the CFL to resume play. One of his clients was Elks first round pick Cole Nelson, who hails from nearby Ponoka.

The biggest difference for Green at this training camp is the absence of McCarty, the guy who held that full back job for a decade

“He had so much character and energy, it’s like somethings missing,” said the 28 year old, who signed a contract extension with the Elks in December of 2020. “I think us in the full back group are trying to keep how he liked to do things — and kind of how his character effected our group — alive in any way we can.”

Green put up the first offensive numbers of his career in 2019 with three receptions for 33 yards.

When Week 2 begins for the CFL teams on Monday, they will be going to camp will fewer numbers, as Elks head coach Jamie Elizondo explained.

“We have to go down from 100 players to 75,” Elizondo said. “So there are a number of cuts just mandated by the CFL.

“We’re going to have to cut some guys.

“We didn’t come to camp with a full 100, some of those guys were in quarantine so some guys will be able to come straight in without making a roster transition.”

Two notable players who will be released from quarantine are receiver Derel Walker and recently-signed offensive lineman Thaddeus Coleman.