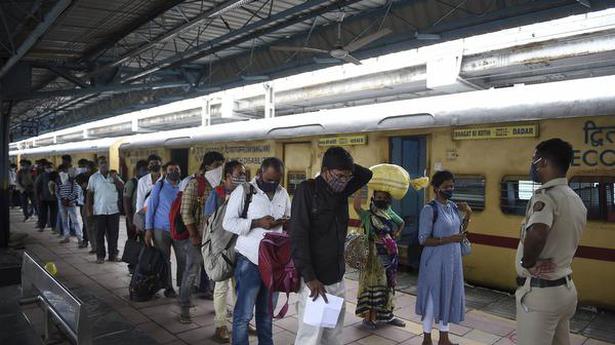 The World Health Organization (WHO) is likely to take a decision on including Bharat Biotech’s Covaxin in its list of vaccines approved for Emergency Use within four to six weeks, Soumya Swaminathan, Chief Scientist, WHO, said at a webinar organised by the Centre for Science and Environment (CSE).

A WHO pre-qualification, or Emergency Use Listing (EUL), is necessary for a vaccine company to supply vaccines to global facilities such as COVAX or international procurement. So far, eight vaccines have got an EUL from the WHO.

You can track coronavirus cases, deaths and testing rates at the national and State levels here. A list of State Helpline numbers is available as well.

Here are the latest updates:

The U.S. is sending 1.5 million doses of COVID-19 vaccines to Nepal and another 500,000 to Bhutan, the White House has said, asserting that its donations around the world are without any strings attached.

“There are no strings attached to our vaccines that we’re providing. We’re providing them around the world to save lives and to be a contributor to the global effort to fight the pandemic,” Psaki said in response to a question.

She said that with these shipments, in this week alone, the U.S. has sent nearly 15 million doses to countries including Guatemala, Uruguay, Paraguay, Bolivia, Afghanistan, and Vietnam.

The High Court of Karnataka on Friday directed the State government to submit the assessment made on requirement of COVID-19 vaccine for the second dose as there is a large gap in the number of persons administered with the first and second doses.

A Special Division Bench comprising Chief Justice Abhay Shreeniwas Oka and Justice Aravind Kumar issued the direction after amicus curiae Vikram Huilgol pointed out that the State may need to seek more doses from the Centre to ensure timely administration of the second dose of vaccine.

95% of college staff on SSLC exam duty have been vaccinated

Primary and Secondary Education Minister S. Suresh Kumar said that 95% of the staff who would be deployed in SSLC examination duty have been vaccinated so far.

Of the total 1.33 lakh staff who will be deployed for examination duty, 1.3 lakh received their first dose, as per data from the Department of Primary and Secondary Education. Of these, 48,938 have received their second shot as well. According to officials, another 3,404 people have their vaccination scheduled for Friday and Saturday.

The Minister on Friday interacted with SSLC students who are set to appear for the board examination later this month. He fielded questions on issues ranging from safety measures that have been put in place at examination centres to the new multiple choice examination pattern.

Vaccination of pregnant women against COVID-19 is slowly picking up pace across Tamil Nadu.

Last week, the Union Health Ministry announced that pregnant women were eligible to get COVID-19 vaccines. Following this, the Health Department started rolling out the vaccination programme for pregnant women across the State.

A health official said acceptance of vaccination among pregnant women was good, and they were launching the programme in many districts. “Awareness as well as interpersonal communication with pregnant women is important. It is important to vaccinate them. We ensure that there is informed consent, and they are monitored closely after vaccination,” he said.

The Calcutta High Court on Friday ruled out a probe by the Central Bureau of Investigation ( CBI) into the fake vaccination racket. The facts “do not warrant an investigation by the CBI”, it said.

“Whether investigation by the said agency would be necessitated in future would depend upon the conclusion of this investigation, and the subsequent steps taken by the prosecution further to it,” the order by bench of Justice I. P. Mukerji and Justice Aniruddha Roy said.

The prime accused in the case Debanjan Deb, along with his collaborators, had been “able to deceive a large section of innocent people, lure them to take vaccination from him at a serious risk to their lives”, the Court observed. The enquiry “does not show that there is any deficiency… that should compel the court to order investigation by the CBI”.

‘Vaccination moving at a sluggish pace in Haryana’

Leader of Opposition in Haryana Assembly Bhupinder Singh Hooda on Friday said that the sluggish pace of corona vaccination in the State was a matter of serious concern and the ruling BJP-JJP government should take steps to boost the inoculation drive.

“Reports of corona vaccine being either over or stocks being low from different districts across the State are pouring in every other day. In many places, health officials had to call the police at the vaccination centres as large number of people were coming to get the vaccine, but they had to return home disappointed due to lack of vaccines,” alleged Mr. Hooda.

He said the Opposition has been continuously warning the government about the vaccine shortage but the State government was not ready to give up its ‘lax attitude’.

The Delhi government on Friday ordered the closure of Gaffar market and Naiwala market in Karol Bagh as well as the DDA market in Rohini’s Sector owing to violation of COVID protocols.

“Market shopkeepers, thiyawallahs/vendors, and general public in Gaffar market and Naiwala, Karol Bagh are not following COVID-appropriate behaviour. Due to large footfall, market association and shopkeepers are not able to ensure COVID protocols in the aforesaid markets for the past three days,” a DDMA order said.

It stated that the Market Welfare Association of Gaffar Market and Naiwala have failed to ensure the strict compliance of the guidelines of COVID-19 and that if any shopkeeper is found violating the order, necessary action will be taken according to the DDMA Act.

Two cases of the Kappa variant of COVID-19 have been detected in Uttar Pradesh, according to an official statement issued on Friday.

Genome sequencing of 109 samples was done at the King George’s Medical College here in the past few days.

The Delta Plus variant of COVID-19 was found in 107 samples, while the Kappa variant was found in two samples, a statement issued after Chief Minister Yogi Adityanath’s routine review meeting said.

Gujarat schools to reopen for Standard XII from July 15

With COVID-19 cases declining, the Gujarat government on July 9 announced that schools for Standard XII and colleges for undergraduate programmes will be allowed to reopen with 50% class strength from July 15.

However, the presence of students will be on a voluntary basis and those not attending the classes will not face any adverse action for their absence.

Also, coaching centres for Standard IX onwards will be allowed to reopen with COVID-19 norms, including maintaining distances and reduced participation of students

Babar's team would be eyeing another big scalp in New Zealand, the team which recently withdrew from a scheduled series against Pakistan after...
Read more
Related news
BC