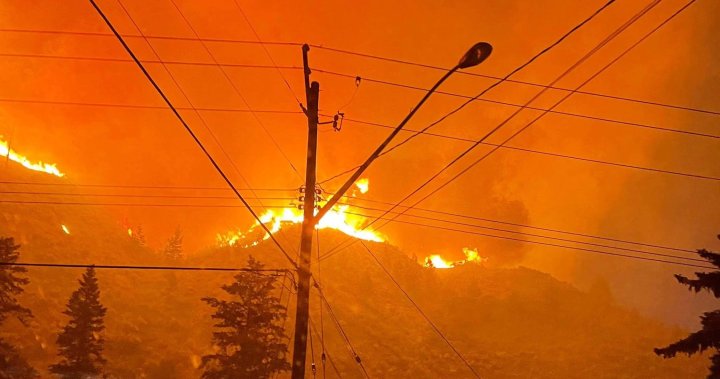 A fast-growing wildfire that sparked dangerously close to the city of Kamloops, B.C., Thursday night led to residents to be briefly evacuated from their homes.

The City of Kamloops said the RCMP were performing a tactical evacuation of homes in the Juniper and Valleyview communities, due to a wildfire that’s burning in the hills between Juniper Ridge and Valleyview in East Kamloops.

A few hours later, the city said the evacuation orders had been rescinded and residents could return to their homes shortly after midnight.

The lifting of the order came after rain started to fall in the area.

Good news – All tactical evacuation orders have been rescinded. Residents in Valleyview and Juniper Ridge can return home. #kamloops

The city said it has activated its emergency operations centre to support the local fire department, which is battling the blaze along with BC Wildfire Service personnel.

Wildfire officials didn’t immediately say how large the fire is.

Video from the scene showed the hills above Valleyview Drive ablaze, sending thick smoke into the air.

View from Valleyview Drive in between Tanager and the Orchards Walk development. Flames are creeping into backyards now but firefighters have arrived and are hooking up to a hydrant with the hose. #Kamloops @CFJC_Today pic.twitter.com/uPXro61u0T

Evacuees had been urged to seek shelter with friends and family, as emergency shelters were full with people who had escaped from the devastating Lytton fire the night before.

Kamloops MLA Todd Stone tweeted that he and his family were among those who had left their homes.

“Family is safe and we’re in a very long line of vehicles slowly evacuating,” he said. “Comforted by lots of emergency personnel up here with us.”

This fire is in our neighbourhood in #Kamloops now. Family is safe and we’re in very long line of vehicles slowly evacuating. Comforted by lots of emergency personnel up here with us. Everyone needs to remain calm. 🙏🏻 https://t.co/ZTtJLvOsw4

At the same time, another wildfire has also sparked just 8.6 kilometres north of Kamloops near Strawberry Hill.

BC Wildfire Service said it has deployed eight personnel to that fire, the size of which was also not immediately known.

That fire is believed to have been sparked by lightning. Conditions are extremely dry due to a scorching heat wave that has made its way across B.C. in recent days.