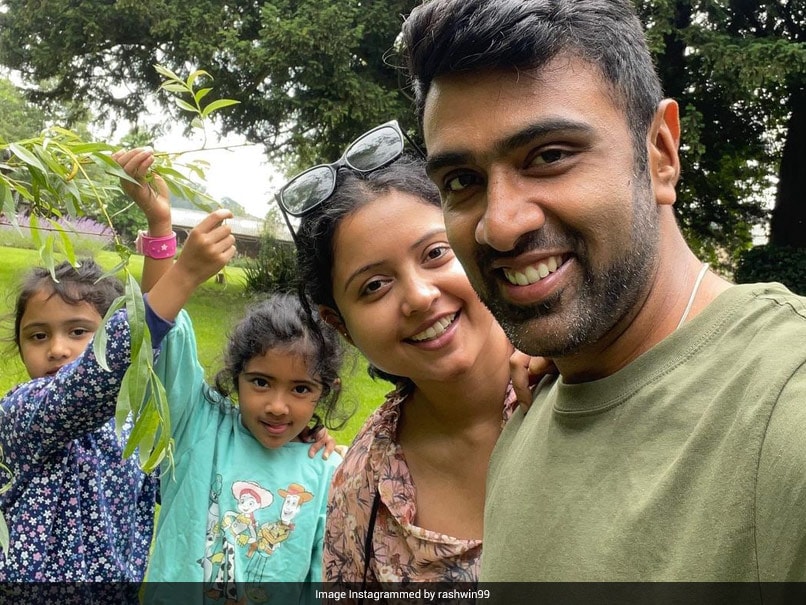 After the end of the World Test Championship (WTC), the Indian cricketers have been holidaying in England by spending some quality time with their friends and families. This has also given the team members a much-needed break from the bio-bubble. From skipper Virat Kohli to seamer Ishant Sharma, Indian cricketers have been regularly sharing photographs of themselves on social media platforms from the various tourist attractions of the country ahead of their much-awaited red-ball series against England. On Friday, spin wizard Ravichandran Ashwin also joined the bandwagon by sharing an adorable snap with his family on Instagram.

In the photo, Ashwin is seen with this wife, Prithi, and their two daughters, Akhira and Adhya.

Within a couple of hours of sharing the photo, the post got over a lakh ‘likes’. Many of Ashwin’s followers commented and dropping red-heart and smiling emojis.

Earlier on Wednesday, Ashwin had also posted a video of himself enjoying the beautiful weather near an ocean with ‘The Life of Ram’ song playing in the backdrop. He captioned the clip, “When ocean meets the sky with the life of Ram”, and credited his wife for shooting the video.

Ashwin was last seen in action during the WTC final between India and New Zealand, which was played at the Rose Bowl Stadium in Southampton. As it was marred by rain, the match lasted for six days, with New Zealand becoming the first-ever team to lift the WTC trophy.

Team India will next take on England in a five-match Test, starting on August 4. Before the start of the second leg of India’s England tour, the players will regroup and enter another bio-bubble on July 15. The 5 Tests will be played at Trent Bridge in Nottingham, Lord’s, Headingley in Leeds, The Oval in London and Old Trafford in Manchester.