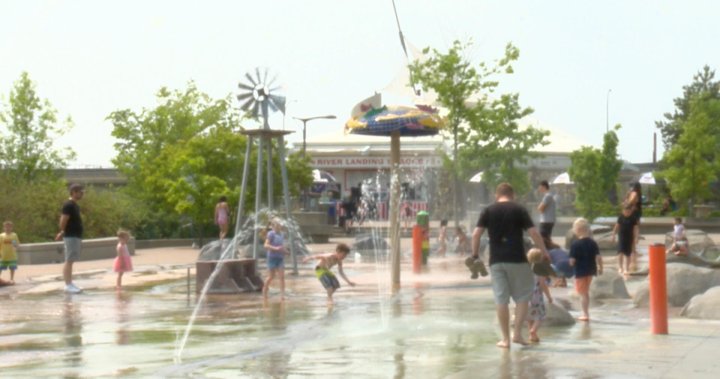 With heat records being shattered in B.C. with the heat dome, Saskatchewan is also bracing for a scorching week, but Environment Canada said it’s worse for our neighbours to the west.

Even the north won’t be safe from some scorching heat.

Read more:
Western Canada’s extreme heat wave: Some experts have ‘never seen’ anything like it

“We’re looking at highs in the low to mid 30s through many parts of Saskatchewan,” said Terri Lang with Environment and Climate Change Canada.

“It looks like the heat will probably peek around Thursday, Friday.”

Lang said it won’t as bad as other parts of Western Canada, but noted the forecast heat is nothing to scoff at.

5:04
How a heat dome is causing record breaking temperatures in Western Canada

The City of Saskatoon has issued a high weather alert: just like when it’s freezing, when it’s too hot the city goes on alert to provide support for vulnerable people outside.

It’s so hot, even at night it’s not getting cold enough for people to cool down. The city is asking people to keep an eye out for anyone on the street who may need water or a hand.

Read more:
What you need to know about the ‘heat dome’ hovering above B.C., Alberta and territories

There are several designated cool-down stations across the city, including at OUTSaskatoon, the Friendship Inn, and the Salvation Army’s foyer.

The Lighthouse is only able to give out water due to COVID-19 restrictions. They said they’re keeping an eye on clients, especially for the possibility of an overdose.

“Just with the dehydration factor, any substances that they’re using (have) a greater effect if their body isn’t in full defence mode,” explained Sarah Campbell.

Meanwhile, the Canadian Red Cross advises only going out in the mornings or later in the day, not mid-day when temperatures peak.

Your furry friend may also need to stay indoors.

“Obviously they’ll want to go out for a walk. If you can do it before work, early in the morning, fantastic,” said Georgiana Matharu.

“Otherwise, maybe you just let them out to relieve themselves and don’t go for a walk on those hottest of days.”

A kiddie pool or damp towel can help your pet cool down.

Environment Canada said temperatures are expected to drop, but not until the weekend.

3:28
Is this the new normal? The science behind western North America’s historic heat wave