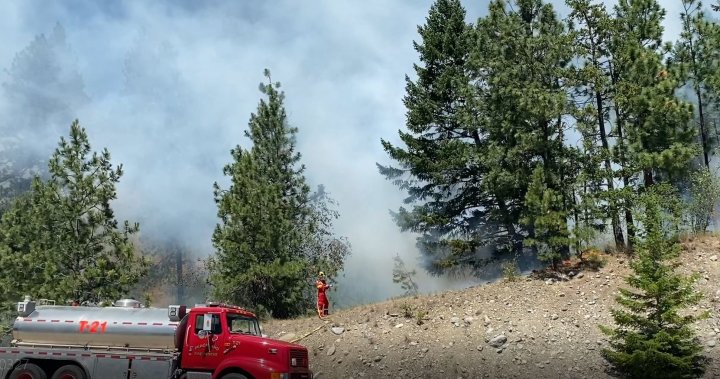 UPDATE: The Peachland wildfire is now considered under control, according to the Central Okanagan Emergency Operations Centre, and officials have deemed the area safe.

During the height of Saturday’s wildfire, all properties along Maranatha Drive had been evacuated, with an evacuation alert issued for nearby homes.

At 6:30 p.m., though, the Emergency Operations Centre (EOC) said the evacuation alert had been rescinded for all properties in the Maranatha area of Peachland.

“The properties on Maranatha Drive that were tactically evacuated by the RCMP are now permitted to return to their homes,” said the EOC.

“While the evacuation alerts have been rescinded, conditions in the Central Okanagan continue to be hot and dry,” added the EOC.

“Residents and visitors should be vigilant and aware that the fire hazard remains extreme. Central Okanagan emergency officials encourage everyone to be safe with any fires or smoking materials.”

The EOC noted that residents seeking information regarding aerial fire retardant on their properties can contact the Wildfire Information Hotline at 1-888-336-7378.

Firefighters and emergency crews are battling a wildfire in Peachland.

The BC Wildfire Service says it and local fire departments are responding to the fire, which was sparked by a structure fire that spread into the nearby brush.

Thirty-one firefighters were said to be on scene, and at least one structure on Maranatha Drive has been destroyed.

One helicopter and air tankers were also involved in the fight, but have since been stood down.

The #BCWildfire Service is currently responding to the McCall Creek wildfire (K50925), ~ 4km SW of #Peachland. BCWS are on site assisting the local fire department. 31 personnel are responding to this fire and are being supported by 1 helicopter and airtankers. pic.twitter.com/MwzFwfYq7r

A view of smoke rising from the wildfire in Peachland.

The fire was once listed as being two hectares in size, but is now pegged at 0.9 ha, and is considered being held.

Emergency crews were called to the fire around noon.

The Central Okanagan Emergency Operations Centre (EOC) has been activated to support crews from BC Wildfire plus firefighters from Peachland, West Kelowna, Kelowna and Joe Rich.

A spokesperson for the EOC says all properties on Maranatha Drive were tactically evacuated by RCMP, and that an evacuation alert is in effect for the following areas:

More information about the evacuation alert can be seen here.

1:42
B.C. businesses warned to prepare for closures due to wildfires

B.C. businesses warned to prepare for closures due to wildfires

“All properties on evacuation alert should be prepared to leave on short notice should conditions change,” said the EOC.

“Residents in the affected area should be prepared to be away from their homes for an extended period of time, make arrangements for pets and pack essential items such as medicines and important documents.”

Smoke from the fire was quite visible and could be seen from kilometres away.

In related news, BC Wildfire says a structure fire near Ashcroft also spread into nearby bush.

Three BC Wildfire crews were on scene, along with the local fire department and one helicopter.

The fire, located two kilometres west of Ashcroft, was estimated to be five hectares in size.

The incident is under investigation but is suspected to be human-caused.