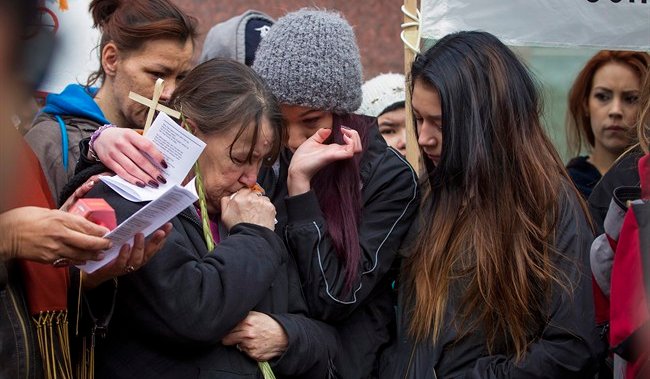 Lawyers say the retrial of a man to be sentenced next week for killing a woman in his hotel room 10 years ago is an example of how cases involving missing and murdered Indigenous women and girls should be handled.

They say Bradley Barton‘s second trial was an improvement over the first, because instructions to jurors included reminders of the traumatic effects of colonialism and encouraged them not to judge the woman’s heritage and lifestyle.

Barton, a truck driver from Mississauga, Ont., was convicted in February of manslaughter in the death of Cindy Gladue, a 36-year-old Metis and Cree woman.

A jury had found him not guilty of first-degree murder in 2015. Both the Alberta Court of Appeal and the Supreme Court ordered a new trial.

His original acquittal sparked rallies and calls for justice for Indigenous women.

There was outrage because Gladue had been referred to as a “native girl” more than two dozen times and called a prostitute multiple times, said Alexandria Winterburn, a board member of the Indigenous Bar Association.

“There was absolutely no need for that and all of that contributed towards people seeing her as not a person, not as a mother, not a daughter, not a sister but as this kind of object,” said Winterburn.

“Her life mattered and having justice for her matters.”

4:33
Cindy Gladue’s loved ones relieved with guilty verdict in her 2011 death

“I will not call the guilty verdict ‘justice’ until we see what the sentence is,” said Indigenous rights lawyer Jean Telliet. “The legacy of this case is horrific.”

But Telliet did call the second judge’s jury instructions unique.

Barton, 53, testified during his second trial that he had arranged to pay Gladue for “rough sex” in his Edmonton hotel room and was shocked when he woke the next morning to find her dead.

The Crown argued that Barton performed a sexual act on Gladue while she was passed out that caused a severe wound in her vagina. Lawyers said he then picked her up, dumped her in the room’s bathtub and left her to bleed to death.

Doctors testified Gladue had four times the legal limit of alcohol in her system.

Winterburn and Telliet said the most appalling part of the first trial was Gladue’s preserved vaginal tissue being presented in court.

Winterburn said the Supreme Court of Canada acknowledged that it was the first time in Canadian history “that an actual piece of a human being was brought before the court as evidence.”

“It doesn’t really come across in writing how absolutely horrific this is because there was no warning for her family (in court),” she said.

“They … literally re-enacted how she bled to death,” added Telliet. “The messages from this case are huge and they’re long lasting,” she said.

“Indigenous women are afraid. If … arriving at justice is so brutal, and so violent itself, then you don’t end up with justice. You’ve destroyed it.

“All you’re doing is duplicating the violence that happened before.”

Read more:
Here’s the 1st steps Canada plans to take in light of the MMIWG inquiry

Winterburn and Saskatchewan-based lawyer Eleanore Sunchild agree the legal system did make some progress when it addressed the history of colonialism during the retrial.

Judge Stephen Hillier asked jury members before deliberations to think about their own biases.

“It is apparent from the evidence that Ms. Gladue is an Indigenous person,” Hillier told them.

“This is particularly significant as Indigenous women and girls have been subjected to a long history of colonization and systemic racism, the effects of which continue to be felt.

“I also remind you to avoid all stereotypical assumptions about Indigenous women who may have been involved in sex work. In rejecting these myths and stereotypes, you must bear in mind that such persons are entitled to the same protections, which the criminal justice system promises.”

Winterburn said it’s uncommon for a judge to include that reminder.

“Unfortunately we live in a society where there are biases, where there is racism. Just letting people know that those biases can exist … that’s very important.”

5:23
The Native Women’s Association of Canada points to shortfalls in federal action plan for MMIWG

The Native Women’s Association of Canada points to shortfalls in federal action plan for MMIWG – Jun 9, 2021