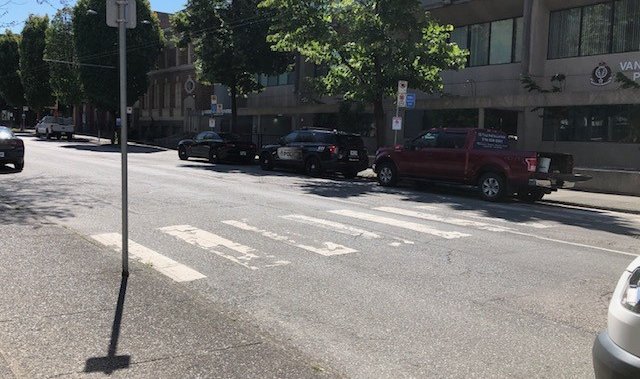 Two Vancouver police officers are under criminal investigation over an alleged assault outside the jail on Cordova Street in March, Global News has learned.

The incident is alleged to have taken place on March 20, and sources say it was captured by numerous security cameras in the area.

The alleged victim is an Indigenous man in his 50s who had been jailed for a few hours for alleged public intoxication.

When he was released, he had words with a VPD officer who was returning to his car.

Sources say the officer allegedly kicked the man in the chest, sending him backward into a pole where he struck his head and fell to the ground.

The officer then drove away with his partner without providing any assistance, sources told Global News.

A woman at the bus stop across the street came to the man’s aid, and seeing that his head was bleeding, called 911. He was taken to hospital by ambulance.

“Two VPD officers who were present for the incident on March 20 are currently on administrative duties,” A Vancouver police spokesperson said in a statement.

Someone with the same name as the alleged victim has a criminal record for mischief, assault, assault causing bodily harm and theft under $5,000.

News of the investigation comes as the Vancouver Police Board prepares to meet Thursday, with the issue of systemic racism expected to be on the agenda.

The West Vancouver Police Department has conduct of the criminal investigation, and told Global News that interviews are still underway.

A separate Police Act investigation by the Office of the Police Complaint Commissioner has been suspended pending outcome of the criminal investigation.