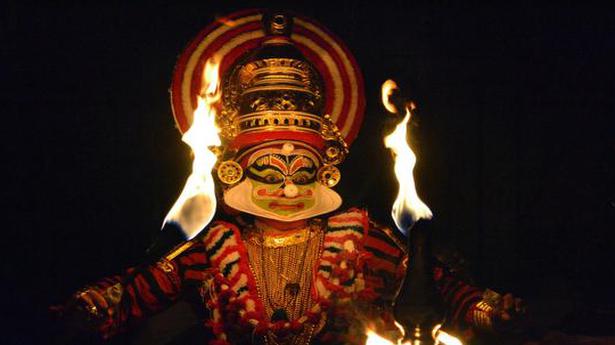 Of all the ancient Sanskrit theatre forms, only Koodiyattam from Kerala has managed to survive. It lived within temple precincts, more specifically in the homes of the Chakyars and Nambiars, the two communities who were its sole practitioners. It is 70 years since Koodiyattam emerged from temples to occupy the public stage as an entertaining theatre form. And for the past roughly 50 years, members of all communities have been welcome to perform it.

Despite this, the state of Koodiyattam seems uncertain. The more than 1,000-year-old theatre form has just around 100 practitioners , and there is a need for immediate support from the government and from society. The lack of full-length performance opportunities, a limited repertoire, the failure to attract new actors, and, most important, the lack of patronage are pressing issues Koodiyattam faces today.

It is true that the number of performance venues and opportunities have gone up in recent times, but what we see today are mostly selected condensed versions, lasting just two to three hours. Such performances, though welcome, are not true to the spirit of Koodiyattam. What is lost in the short format is the deep and subtle acting, the long solo scenes that offer the actor freedom for unhurried digressions, the powerful eyes that bring out the spectrum of nuanced rasas, the detailed abhinaya techniques, and the depth of knowledge that needs to be acquired to perform the longer version.

It must first be understood that Koodiyattam is not just another art form, comparable to Kathakali or other classical dances. It has never enjoyed a popular base. Recognised as intangible heritage by UNESCO, it survived because the temples were its sanctuary and the royals its patrons. It was meant to be performed in a koothambalam or the amphitheatre within the temple in an intimate setting for some 100 people, where the plays unfurl ever so slowly over long hours and days, almost with a meditative quality. A single act of a play may take anywhere from seven days to 20 days to complete.

Says David Shulman, Indologist and professor at Hebrew University, Jerusalem: “In any country that respects and values its own great artistic achievements, a classical art like Koodiyattam would receive significant state support. In India, this could and should come from both the Kerala government and the federal government. It is important to keep in mind that the continuity of this tradition is now hanging by a thread.”

Temples used to host annual performances lasting several days, known as ‘Adiyanthirakoothu’ or ritualistic art, but over the years, this has been discontinued in all but a handful of temples. What is lost primarily is the platform for repeated full-length performances that is necessary to mould an artiste. Shulman, who organised several performances lasting weeks at Nepathya Moozhikkulam, says the full-length performances — ranging from 12 to 150 hours spread over many consecutive nights — constitute the true aesthetic aspect of this art form.

Sangeet Natak Akademi has stepped in to some extent to fill the funding gap left by the temples and royalty. But Koodiyattam artistes say that apart from being inadequate, the fund’s mandate is not specific and its fate uncertain. Apart from a scholarship scheme for some artistes, the Kerala government too doesn’t offer any monetary support. What is urgently needed is a permanent structure with adequate funds to preserve the form.

According to Margi Madhu, veteran artiste and artistic director of Nepathya Centre for Excellence in Koodiyattam at Moozhikkulam, the biggest challenge is the potential erosion in scholarship. “Koodiyattam cannot be learnt part-time,” he says.

An actor must train rigorously for at least 10 to 12 years before he can acquire some level of proficiency in Koodiyattam and the allied narrative art of Prabandhakoothu. The skill sets they need to master are formidable — a working knowledge of Sanskrit, ability to memorise verses and prose passages, knowledge of the epics and familiarity with literary texts, apart from the the physical effort to mould one’s face, eyes and the whole body to express emotions.

Even after finishing a 12-year course, they must practise regularly and continue to engage with various literary texts. An actor’s repertoire should not be limited to a handful of popular plays. Unlike in other classical artforms, scholarship is as important as acting and dancing skills for a performer. Madhu emphasises that Koodiyattam training must be institutionalised and properly funded. That is the only way to attract new talent, he says.

Kalamandalam Rajeev, a percussion artiste and vice-president of Ammannur Gurukulam in Irinjalakuda, says the problems that Koodiyattam faces today are not insurmountable. “We just need more resources. New students will be prepared for the long haul if they are convinced they can make a career of it. But the current situation, where a guru who has been practising this art for 30 years, receives less than Rs.12,000 as honorarium from Sangeet Natak Akademi’s Koodiyattam Centre, is not very encouraging for students,” he says.

Even Kerala Kalamandalam finds it difficult to draw male students for Koodiyattam. There are at least four other institutions or gurukulams engaged in teaching and performing the theatre form, besides several freelance artistes. Ratheesh Bhas, a freelance mizhavu drum player, doesn’t get enough opportunities to perform since he is not attached to a group.

Rajeev says the central government must institute a committee comprising artistes, scholars and connoisseurs to come up with a structure that classifies artistes and pays them a regular market-pegged salary.