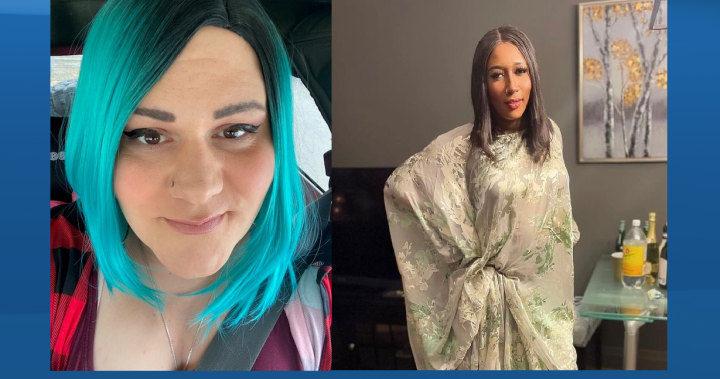 June is Pride Month, a 30-day celebration of the impact the LGBT community has had on the world, as well as the struggles it has faced and continues to face.

“We’re different,” Cindy Rivers said. “If you think about the rest of the letters, everything is sexual-orientation related. Being trans is the only one that’s gender-identity related. Those are all about who you like, who you’re interested in, who you’re sexually or romantically attracted to.

“Your gender identity is your innate sense of self, it’s who you know you are. It’s completely different,” said Rivers, an Alberta trans woman who works as a comedienne and with Pride Centre Edmonton as a volunteer coordinator and educator.

“Those other letters kind of all get to run together and we’re a little bit different.”

She says there’s even a subset of LGB people who don’t believe “the Ts” belong in the same group.

Rivers believes trans acceptance is still trailing behind other groups represented in the LGBT family. However, she says it’s getting better every year.

Rivers came out at the age of 30 in northern Alberta. She hopes progress continues — when it comes to social acceptance, understanding and medical supports.

“We just need to destigmatize a bunch of stuff and we need access to things to help the transition.”

The more people know about the trans experience, the better, she says.

“There are so many simple things that are actually life-saving. Using proper pronouns is not a polite thing; it is a life-saving intervention, especially for trans youth.

“If you’re respecting somebody’s pronouns, it can literally save their life. Being mis-gendered is horrible. It’s a horrible, horrible feeling, especially if you’re anywhere in your transition and somebody does it on purpose.”

Another simple takeaway message Rivers shares in every single educational session she leads?

Rivers started her transition about five years ago while living in Fort McMurray. She had simply reached a breaking point.

“It got to a point… I can’t do this anymore. I attempted suicide and I failed.

“After some time in the hospital and dealing with some things, I started to come out,” Rivers said.

The first person she came out to was her then-wife.

“That was interesting. We didn’t really tell anybody else for a little while… a couple months.

“We couldn’t really figure it out so we split up and I slowly started to tell everybody else. I came out at work and to my parents.”

Read more:
3 Black Canadians on inspiring the next generation of queer leaders

After she came out, Rivers wanted to start the transition process as quickly as possible but she didn’t know where to start.

“There’s not really a handbook,” Rivers said. “It’s a little better now. We’ve made leaps and bounds of changes in the last few years in the way Alberta, the medical system deals with trans people, which is absolutely wonderful.”

As she started learning how to navigate the health system and all the steps she’d have to take, Rivers started her social transition, expressing herself more “femininely” at work, which felt “good,” Rivers said, not necessarily comfortable, but more authentic.

“It’s a wild ride. I felt better about myself.

She did that for six months.

“I would hop between girl and guy mode all the time and basically be like two different people,” Rivers said. “It was brutal.”

While she ran into her fair share of horrible people, Rivers said she never felt unsafe in Fort McMurray.

“It’s hard at first … I was always hyper vigilant. I would be careful where I went and I was very aware of my surroundings.

Rivers moved to Edmonton in October, where she finds it “pretty much the same.”

The transition process can take years, Rivers says. Her own is considered “breakneck speed” at about three years.

It typically involves psychologists, official diagnosis and doctors’ letters, an endocrinologist, hormones, waiting lists and sometimes, gender confirmation surgery. Some elements are covered by Alberta Health, others are not.

“It’s a long very convoluted path for you to prove who you are and to get that funding to make that happen,” Rivers said.

“You need to see a doctor for a while who’s willing to see you about this particular thing — and some of them aren’t — but they’re not allowed to refuse medical service so they put you in this world of referrals.

“They get you in with an endocrinologist. You see them for a little while. You’re probably a couple years in. You finally get a prescription for hormone replacement therapy.

Rivers said there are only a couple psychologists in Alberta that will offer this kind of care.

Then you can submit the paperwork to the province for funding coverage.

“All in all, it’s about a five-year plus system, if you’re on top of everything.”

Rivers would like to see the process streamlined and simplified.

“We need access to hormones, to therapists, stop hiding it behind 1,200 doctors or 15 different letters or four years of waiting lists.”

There have been no changes to funding or eligibility criteria for gender reassignment — or gender confirmation — surgery under the United Conservative government, the health ministry told Global News.

The program is available to Albertans who are diagnosed with gender dysphoria by a psychiatrist or physician licensed in Alberta and who meet program criteria, which are based on World Professional Association of Transgender Health standards of care.

A licensed Alberta psychiatrist or physician must apply for this funding on behalf of a patient, Alberta Health said.

2:46
Transgender care in Alberta at risk after lead of gender program resigns

Transgender care in Alberta at risk after lead of gender program resigns – Sep 16, 2019

Breast surgeries for transgender Albertans are insured services in Alberta for patients who meet eligibility criteria under the Alberta Health Care Insurance Plan.

Hormone therapy can be prescribed by any licensed physician or primary care provider in Alberta.

Alberta Health said there is currently no waitlist for funding for Alberta’s Gender Reassignment Surgery Program. However, the Centre Metropolitain de Chirurgie may have a waitlist for surgery.

Rivers said the biggest milestones for her were hormone therapy and having her name changed.

“The hormones were a big step. When I finally got to that step, it was more of a psychological thing than a physical thing.

“It was like: ‘It’s happening. This is a real first step.

“This isn’t a social transition. This isn’t wearing clothes, this isn’t a superficial thing. I have these hormones and I’m going to start taking them. This is a real thing.’ It was a really big victory.

“You have all these victories along the way but everything is such a fight to get. Nothing happens right now.”

Kash Wanjiru’s coming out experience had another hurdle. She came out as transgender while living in Kenya.

“Life in Kenya wasn’t easy for me.”

She sought supports and was able to move to Canada — first Montreal then Edmonton in 2017.

“I was looking for a safe place,” Wanjiru said.

Since making Edmonton home, she has started working as executive director for Raricanow Canada, which helps LGBTIQ+ refugees.

Wanjiru is particularly passionate about helping Black trans newcomers navigate the legal process of getting here and then adjusting to life in Alberta, including finding employment.

“(They) are coming from all over,” she said, adding some are seeking asylum in Canada.

“It’s not that easy for them. There’s a few challenges.”

Pride Month is marked by an array of events, festivals, parades and of course, cheerful rainbow flags. But its history, like that of many other marginalized groups, isn’t so cheery.

The rise of LGBT rights is largely attributed to the Stonewall Riots of 1969 in New York and the “Operation Soap” Bathhouse Raids in Toronto in the early 1980s.

Both events saw the gay community fight back against police discrimination and served as catalysts for the LGBT movement. They are credited with leading to monumental changes, like the decriminalization of homosexuality and its declassification as a mental illness, as well as sparking countless Pride parades across North America, giving a voice and a platform to members of the community.

Read more:
Pride Month is here. This is how it started and what it looks like today

For Wanjiru, Pride is about belonging.

“It’s creating awareness and showing we all belong there, (while) reminding that we still have work to do,” Wanjiru said.

“It brings us all together… There’s still divisions but people do come out.”

There are often cultural, religious and societal beliefs in the Black community that perpetuate stigma and prevent acceptance, she says.

“It’s still challenging when it comes to the Black community not supporting trans folks.”

Read more:
‘We are not divided’: Calgary Pride, BLM YYC to work together after rainbow crosswalk vandalized

“My very first time out in public as myself was a Pride event,” she recalled. “I was able to do that because I felt it was safe.

“Having Pride events — or just the knowledge that Pride exists in June — it’s like a signal to the community that, ‘Hey, there are other people out there in the world. You’re not alone. You’re safe. You can come here.’

“It’s like the bat signal for safety,” Rivers said. “That’s kind of what it still is for me.”