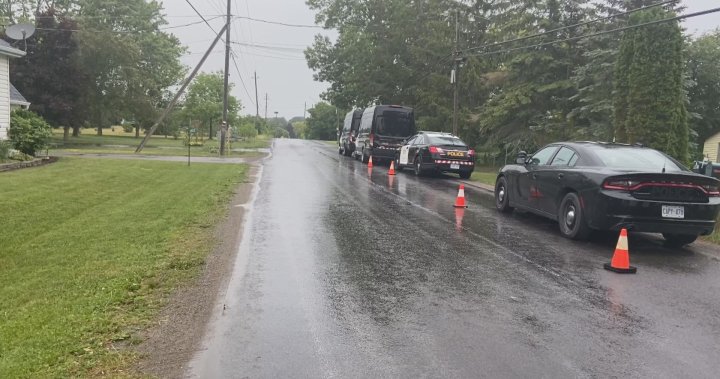 Experts say it’s commendable no one was injured and a pair of suspects were arrested early Friday morning in Belleville, Ont., even though police say they were fired upon.

Eric Paul Wildman, 34, and an unnamed “associate” were taken into custody in the early morning hours of June 18, police say, after a manhunt that lasted more than a week.

Wildman is suspected in the homicide of Clifford Joseph, 40, who was named a missing person on June 7.

“I think the fact that despite shots being fired and one person presumably having been murdered, (police) were able to apprehend the suspect without a shootout, and that everybody was able to walk away, is a commendable operation and a testimony to the professionalism of the way this was ultimately conducted,” says Christian Leuprecht, a professor with the Royal Military College of Canada and Queen’s University.

“We live in a big country, and I think it demonstrates the challenges of rural policing, where there’s relatively few people, big terrain, relatively few policing resources, and where we still have major crimes that transpire.”

The best way to contain someone is inside a house, Leuprecht says, which is ultimately where Wildman was arrested.

Early on, RCMP said a search of Wildman’s vehicle turned up firearms and items resembling police clothing and equipment, which would have had a “major impact” on the investigation, Leuprecht says.

“At this point, it’s very clear that this individual poses a significant potential threat to public safety, and it shows intent … so you would not engage this individual just with any one officer. Any time there’s a sighting, you’ll need to have multiple officers in place,” Leuprecht says.

Sherry Lee Benson-Podolchuk is a former RCMP officer of 20 years, who spent a large portion of her career in Manitoba.

Read more:
Timeline: The search for Eric Wildman, and what we know so far

She says she’s been involved in similar searches, and the idea that guns may be involved ratchets up the tension and risk of violence immensely.

“I’ve been on those kinds of investigations when you’re doing a roadblock and every time a car comes by your heart kind of, is this the guy? Is this the person? So your anxiety level is heightened,” Benson-Podolchuk says.

“(Police officers) are human beings; they want to come home at the end of the day, they want to keep the public safe, that’s the number one thing, (and) they want to bring in the suspect so nobody else gets hurt.”

Adding to that anxiety is the fact police are searching for someone who has their own agenda, and very likely knows they’re being followed.

“When I heard there was a shooting I thought ‘oh my gosh, it could go really bad,’ and then you know, suicide by cop, nobody wants to do that, I mean that will change your life forever,” Benson-Podolchuk says.

Police had earlier said they’d received at least a couple hundred tips about Wildman’s whereabouts and the vehicle he was believed to be driving, which Leuprecht says is “indispensable” in such investigations.

“Not just in terms of the individual to confirm they’re still in the vehicle, (but) that it’s the same individual in that vehicle, that he hasn’t for instance switched vehicles with friends or something like that,” Leuprecht says.

“There are some things you simply can’t do electronically, where you need visual identification.”

Benson-Podolchuk says having thousands of extra people keeping eyes out for a suspect can help change the course of an investigation, especially when there’s only so many officers spread out across a sizable area.

“So they did a fantastic job being very proactive with their tips and helping the police come to this final conclusion.”

Going forward, Benson-Podolchuk says it will be a journey for the communities involved to return to a sense of normal.

“This has a tremendous impact on small communities, that sense of innocence is gone, and it really takes time for them to reclaim that; their space.”