Angad Bedi reveals the person who will get to name his second baby with Neha Dhupia, had named Mehr too | Bollywood

But he’ll take it — and so will the underdog, never-say-die Canadiens, who now sit an improbable two victories from the Stanley Cup final following another crazy twist in an incredible season.

Josh Anderson scored his second goal of the night at 12:53 of overtime and Carey Price made 43 saves as Montreal defeated the Vegas Golden Knights 3-2 on Friday to take a 2-1 lead in this third-round matchup hours after learning interim coach Dominique Ducharme had tested positive for COVID-19.

“I would have thought my first chance running an NHL bench would be an exhibition game,” said Richardson, a Canadiens assistant temporarily promoted to the top job in Ducharme’s absence. “But it happened to be in third round of the Stanley Cup playoffs in overtime, so it’s pretty exciting.

“We’re just hoping to keep this thing going and we’ll get the whole group back together.”

Cole Caufield had the other goal for Montreal before 3,500 fans at the Bell Centre as the plucky Canadiens won in OT for the fourth time in these playoffs. 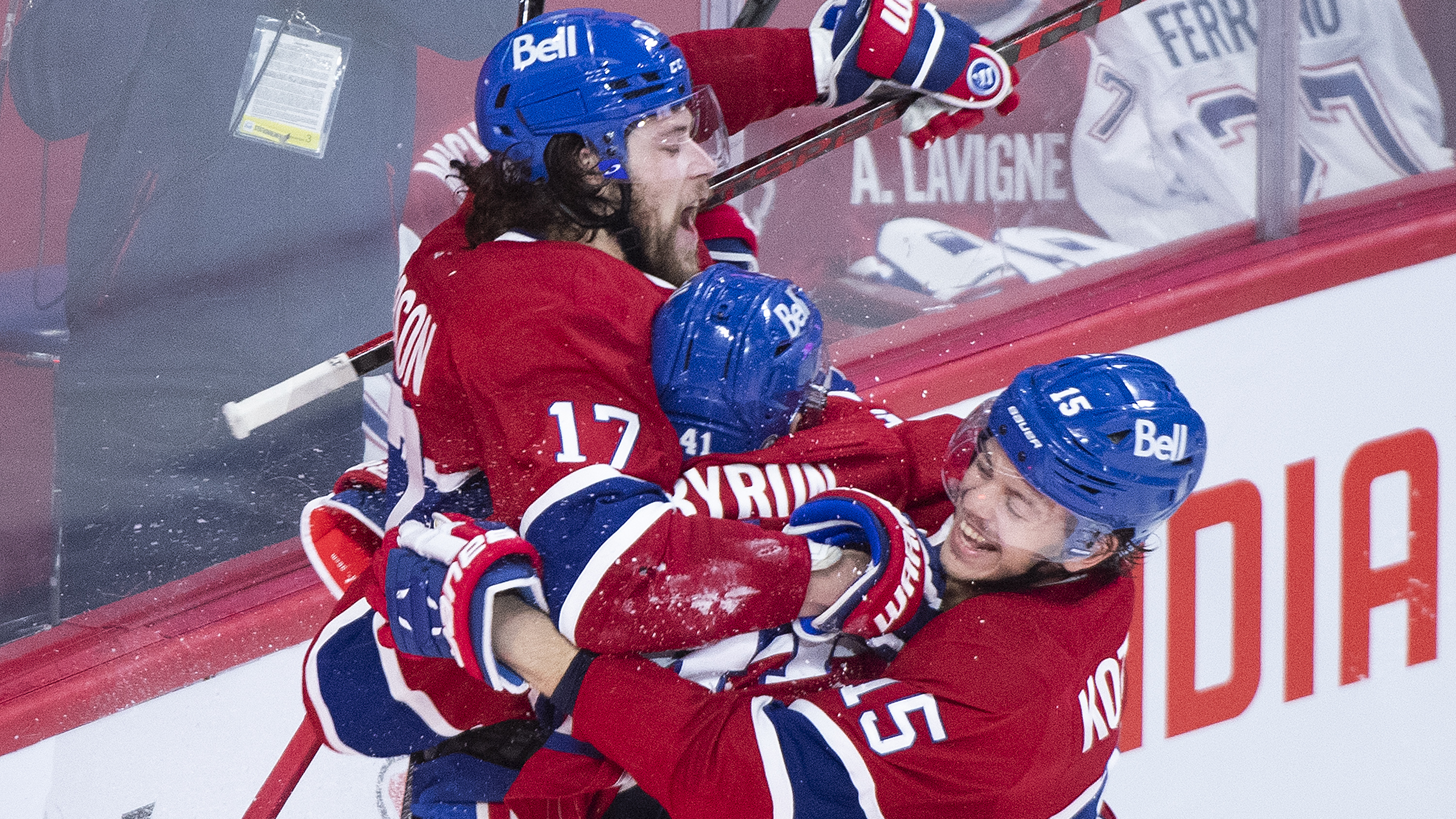 Ducharme’s first test came back positive Friday morning before a subsequent result provided confirmation. He addressed the team before and after the game virtually, and was in communication with Richardson and his staff between periods.

“It was very difficult,” Anderson said of not having Ducharme present. “Most of us were pretty confused, too. Us staying in such a tight bubble, and not going anywhere outside.

“When you lose your head coach, it’s obviously very tough.”

Nicolas Roy and Alex Pietrangelo replied for Vegas. Marc-Andre Fleury finished with 24 stops — and one major gaffe on Anderson’s equalizer late in regulation — for the Golden Knights, who sat 23 points ahead of the Canadiens in the regular-season standings.

“We liked the way we played,” Vegas captain Mark Stone said of Fleury. “Starting from the top, we have to score goals.”

The Golden Knights will have to do that when the best-of-seven showdown resumes Sunday night or they’ll be heading home in a 3-1 hole.

Anderson’s winner came after he knocked down an aerial pass from Jesperi Kotkaniemi at the offensive blue line. The puck fell to Paul Byron, who froze Fleury before passing back to Anderson for his third goal of the playoffs to send the Bell Centre into a chaotic celebration.

“It looked like we had a lot more energy than them [in OT],” Anderson said. “We found a way.”

But it wouldn’t have got that far without Price, who stymied Vegas time and again until his teammates finally found traction.

“It was incredible,” Anderson said of the goaltender’s performance. “He kept us in the game, all game.

“We wouldn’t be sitting here talking about this without him.”

WATCH | Price denies Tuch with incredible save in final frame: 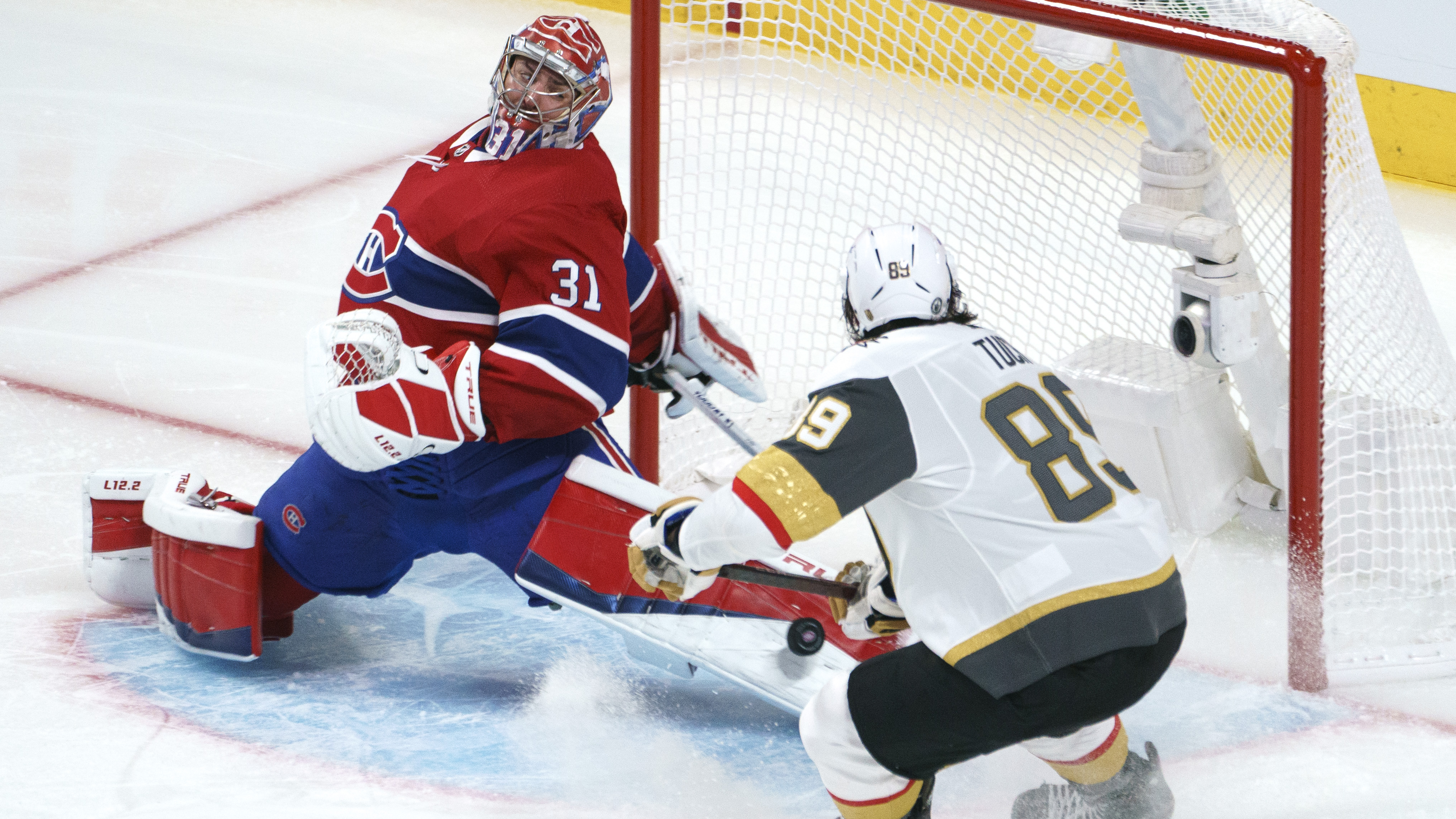 Montreal goalie Carey Price denies Vegas forward Alex Tuch with a great save to keep his team’s deficit to a goal. The Canadiens would go on to win 3-2 in overtime and Price would finish the game with 43 saves. 0:30

After the Golden Knights, who dominated much of the first two periods and led 30-8 on the shot clock through 40 minutes, killed off a penalty to start the third, Pietrangelo fired his fourth goal of the playoffs — and third in the last two games — under Price’s blocker on an odd-man rush at 2:22.

Vegas appeared to be cruising to a 2-1 series lead late in the third when Fleury, who was solid all night up to that point, could have been fitted for goat horns after misplaying the puck behind his net and gifting Anderson his second into an open net with 1:55 remaining.

“Those type of events are tough to recover from,” Golden Knights head coach Pete DeBoer said. “We talked between the third and the overtime about trying to get our mojo back.

“There’s no doubt that carried into the overtime for us a little on the negative side, and for sure gave them some pop.” 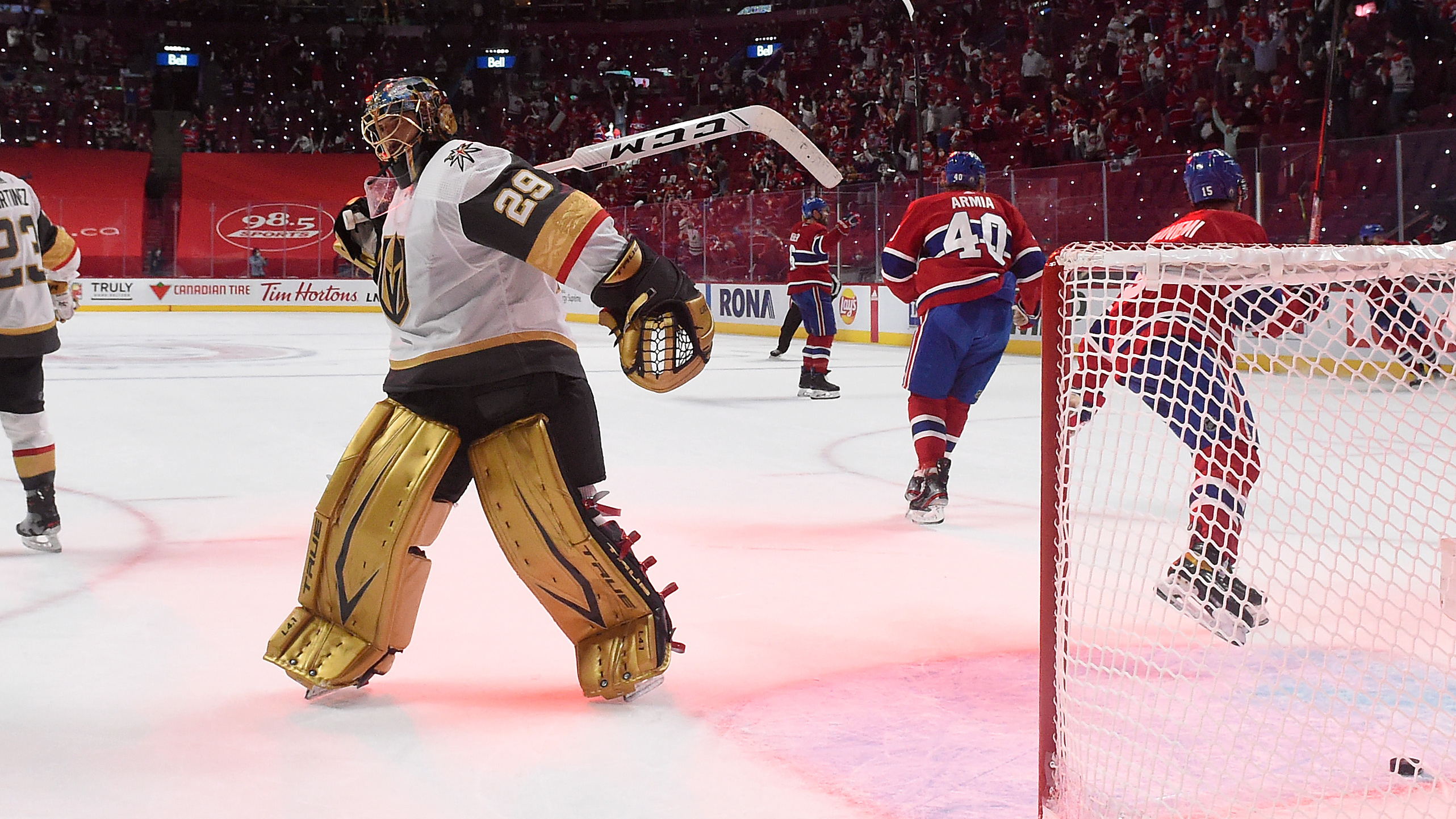 Marc-Andre Fleury goes behind the net to play the puck but coughs it up and Josh Anderson buries the gift from the Golden Knights netminder to tie the game 2-2 with less than two minutes remaining in regulation. 1:02

Ducharme’s absence is just the latest negative bump in the road for Montreal in a trying 2020-2021 campaign.

The Canadiens got off to a hot start, but struggled in February, which led to the firing of Claude Julien and associate coach Kirk Muller, and the promotion of the 48-year-old Ducharme from an assistant’s role.

Montreal also dealt with a COVID-19 outbreak in March before a number of key injuries hampered the team as it limped into the playoffs.

The Canadiens were expected to be blown out by the Toronto Maple Leafs in the first round, but instead rebounded from a 3-1 series deficit to stun their Original Six rivals in seven games.

Montreal was again an underdog against Winnipeg in the battle for the Canadian-based North Division crown only to again shock the hockey world by sweeping the Jets.

“It’s been up and down this year,” Price said. “But I feel like we’ve always responded well to the adversity. [Game 3] was just another example of that.

“Not having Dom behind the bench was just another twist.”

The NHL said in a statement before Game 3 announcing Ducharme’s positive test that all of the Canadiens’ players, fellow coaches and team staff came back with negative results both Thursday and Friday.

“Things went fast, and maybe that’s better off,” Richardson said. “We didn’t have too much time to think about it.” 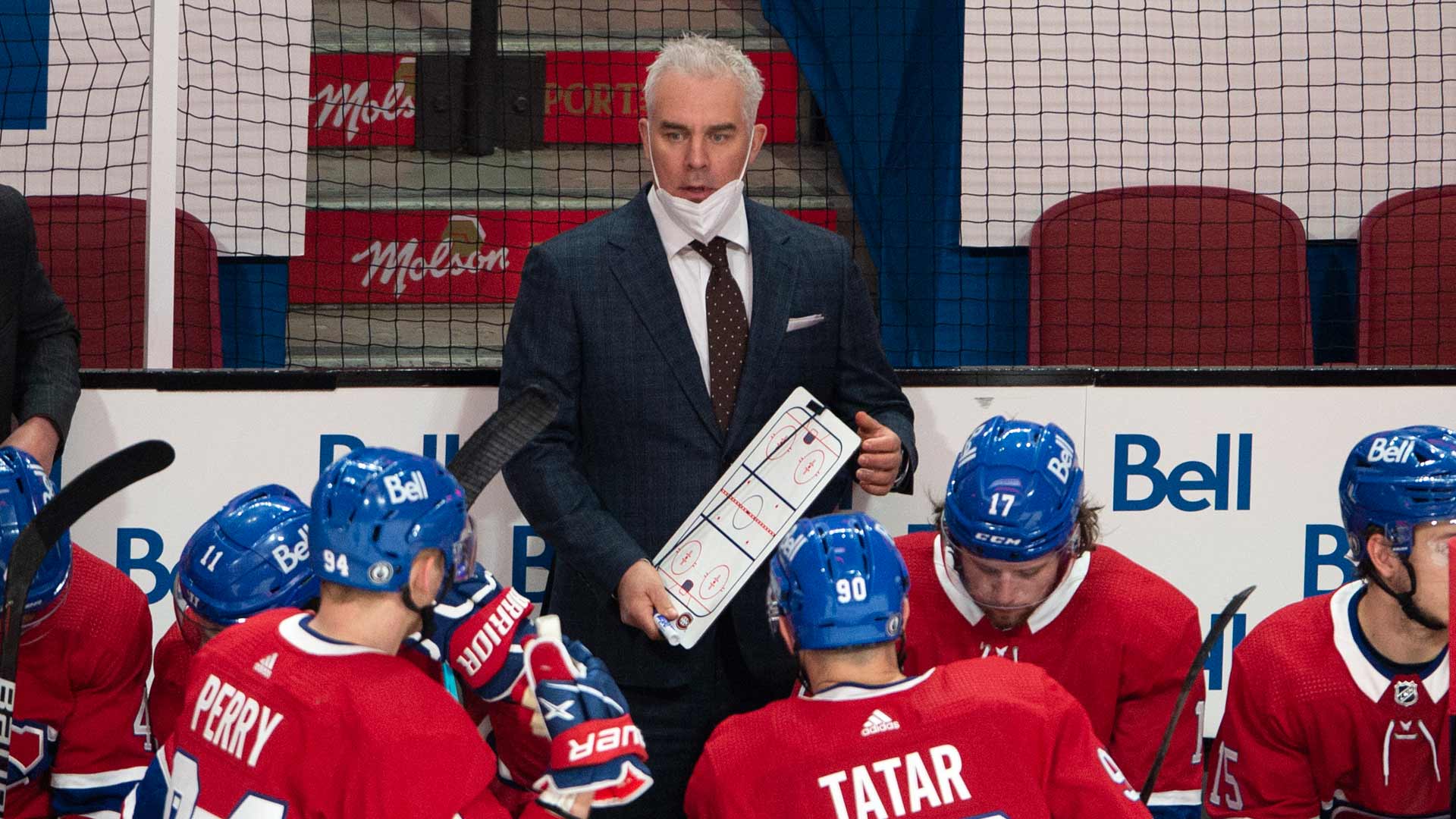 In the heat of the playoffs, the head coach of the Montreal Canadiens, Dominique Ducharme, is out after testing positive for COVID-19 and it’s raising questions about the risks it poses to the entire team. 2:00

Montreal also had to do without its coach during last summer’s post-season bubble when Julien was rushed to a Toronto hospital before having a stent installed into one of his coronary arteries.

“I don’t think we ever prepare for it,” Richardson added of being thrown this loop for the second time in 10 months. “I think we reacted very well.”

In his seventh season as an NHL assistant — and third with Montreal — the former defenceman was head coach of the AHL’s Binghamton Senators from 2012 through 2016.

With coronavirus restrictions further relaxed in Quebec, the Canadiens were allowed to boost attendance by 1,000 after welcoming 2,500 spectators for their last three home games.

Friday marked the first two-anthem night north of the border since last September thanks to a federal exemption allowing teams to bypass Canada’s 14-day quarantine requirements.

Following a first period where the Golden Knights carried the play and held a 16-3 shot edge after Montreal had great starts in Games 1 and 2 in Sin City — winning the latter 3-2 on Wednesday — Vegas finally got on the board at 3:16 of the second on a gift from Canadiens winger Eric Staal.

The veteran forward inexplicably threw a pass in front of his own net that was intercepted by Roy, who roofed his second.

Montreal got that one right back just 38 seconds later when Nick Suzuki — no worse for wear following a massive open-ice hit from Brayden McNabb earlier in the period — blocked a shot and fed a pass ahead to a streaking Caufield.

Montreal’s rookie sniper moved in alone and fired his second over Fleury’s glove, setting the stage for more late drama.

“We just don’t quit,” Price said. “We’ve gone through a lot of adversity.

This time, without their coach.

India “remains a challenging place” to do business, the US has said, urging it to foster an attractive and reliable investment climate by...
Read more
India

India men's hockey team got off to a flying start at the Tokyo 2020 Olympics after edging out New Zealand 3-2 at the...
Read more
Related news
World

India “remains a challenging place” to do business, the US has said, urging it to foster an attractive and reliable investment climate by...
Read more
India