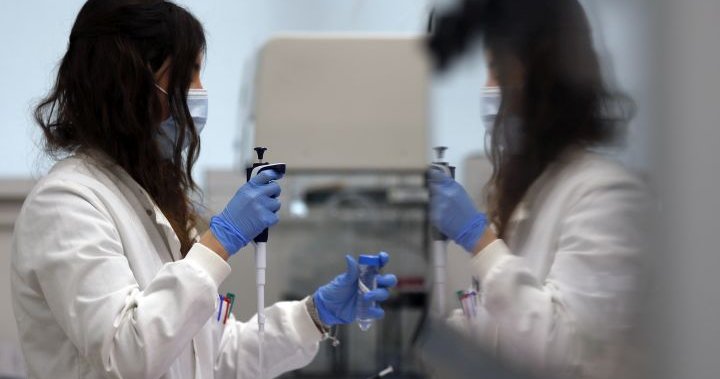 The number of confirmed COVID-19 cases attributed to the highly contagious Delta variant jumped 66 per cent in Canada this week.

Canada’s chief public health officer Dr. Theresa Tam said as of Friday there are just over 2,000 confirmed cases of the variant.

Just three days ago, the Public Health Agency told The Canadian Press there were 1,187 confirmed cases.

“The Delta variant is now in all provinces and at least one of our territories,” Tam said at the House of Commons health committee.

“Of course, as with all coronavirus cases, we may not know every single case that has occurred in Canada, hence my warning of precaution and the need to get two doses of vaccine into as many people as possible.”

The variant was first identified in India but has now become the dominant strain in the United Kingdom where it is spreading rapidly, mostly among unvaccinated people.

It is believed to be at least 1.5 times as contagious as the Alpha variant first identified in the U.K. Alpha is, for now, the dominant variant in Canada, with more than 216,000 cases confirmed.

Public Health England reported Friday the number of confirmed Delta cases in the U.K. had grown 80 per cent in the last week, to almost 76,000. British Prime Minister Boris Johnson had to delay plans to fully lift all public health restrictions next week, with plans to keep the final limitations in place at least another month.

Tam says the variant is a concern because one dose of vaccine isn’t as effective against it and it underscores the need for Canada to keep picking up the pace on second doses.

Two doses of the vaccines Canada is using are believed to offer very good protection against Delta, and even one dose has been found to be good at preventing serious illness.

All provinces are warning against the existence of Delta. It is believed to be the driver of a major outbreak at the Kashechewan First Nation in northern Ontario, is involved in an outbreak at a Calgary hospital, and is worrying health officials in Waterloo, Ont., which is suddenly the province’s COVID-19 hot spot.

Watch below: Some Global News videos about COVID-19 outbreaks involving the Delta variant at a Calgary hospital.

Data on the variant in Canada, however, is limited and it hasn’t yet been added to the Health Canada website reporting variant cases. Only Alpha, Beta (the B. 1.351 variant identified in South Africa, and Gamma (the P. 1 variant first identified in Brazil), are listed on Canada’s website.

That site also hasn’t adjusted the names to use the Greek alphabet now preferred by the World Health Organization. A spokeswoman for Health Canada told The Canadian Press in early June that Delta would be added to it in “the coming weeks.”

When asked again this week, the same answer was provided.

Dr. Howard Njoo, the deputy chief public health officer, said data gathering on the variant hasn’t been easy and there is a lag in reporting.

“There are obviously some issues we need to work on,” he said, noting there “are probably more cases” than we have seen reported.

He said, however, the data provinces and territories do have suggest most of the Delta cases are being found in people who aren’t vaccinated.