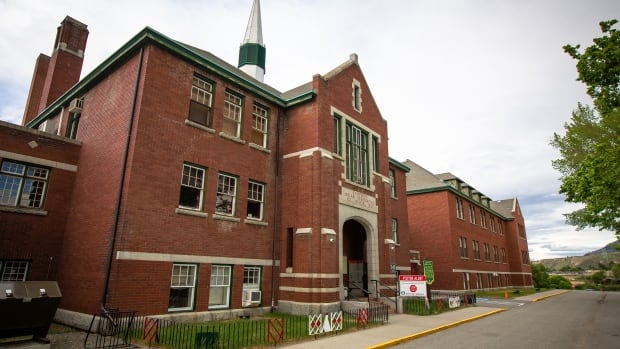 WARNING: This story contains details some readers may find distressing.

A key government adviser for Alberta’s new elementary social studies curriculum says people are overreacting to the discovery of what are believed to be the unmarked burial sites of children’s remains adjacent to a former residential school in Kamloops, B.C.

“Almost the entire media and social media class in Canada, however, seized on Kamloops as evidence of ‘Canada’s Holocaust,’ as if the children had been deliberately killed or that death was the norm rather than the very sad exception,” Chris Champion wrote Thursday in the Dorchester Review, a history publication which he edits.

He says there is a “vast gulf” between the fate of children buried in Kamloops and the magnitude of other atrocities. He wrote that Indigenous people should not be “entitled to some unique aristocratic victim status.”

Last year, the Alberta government paid Champion $15,400 for 38 days of work providing advice on the kindergarten to Grade 6 social studies curriculum. He previously worked for Premier Jason Kenney when Kenney was a federal Conservative cabinet minister.

Champion did not respond to a request for comment.

Parents, teachers, academics and Indigenous leaders and elders have panned the draft curriculum as racist, Eurocentric, age-inappropriate and unsupported by research about how children best learn.

“‘They were put through hell’ and yet they are having an absolute blast on that play structure. What gives?” reads one tweet from Wednesday. Another tweet claimed the mortality rate for children in residential school was lower than for the general population of young children in the early 1900s.

The Truth and Reconciliation Commission has identified about 4,100 children who died at residential schools, but says this is likely an underestimate due to poor records. The commission concluded children were abused, physically, emotionally and sexually, and that they died in intolerable numbers.

Nicole Sparrow, press secretary to Education Minister Adriana LaGrange, said in an email that Alberta Education denounces the Dorchester Review’s tweets. She said Champion is not involved in the development of curriculum for Grades 7 to 12 and hasn’t worked for the government since September 2020.

“The forcible removal of Indigenous children from their homes to residential schools is a dark, deplorable part of Canada’s history — which is exactly why, for the first time, the new draft curriculum will teach students about residential schools, Truth and Reconciliation and ensure students learn First Nations, Métis and Inuit content in every single grade,” she said.

The draft does not introduce the concept of residential schools until Grade 5, counter to the Truth and Reconciliation Commission’s calls to action to start in kindergarten.

Kisha Supernant, a University of Alberta archeology professor who works with Indigenous communities to uncover unmarked burial sites, says the government needs to revisit the curriculum with “more appropriate” advisers. One photo of smiling children does not negate thousands of survivors’ stories, she said.

“Someone who thinks that that’s quality scholarship shouldn’t be writing a curriculum, because clearly, they don’t understand,” she said.

Daniel Panneton, program and education assistant at Toronto’s Sarah and Chaim Neuberger Holocaust Education Centre, said he sees parallels between the Dorchester Review tweets and the rhetoric of Holocaust deniers.

“The fact that that person is potentially shaping the way that Canadian children are learning about their own history is very concerning, in that he may be impeding a much-needed conversation and reckoning,” he said.

Opposition NDP education critic Sarah Hoffman says the tweets are further evidence the education minister should rescind the draft curriculum, and rework it with Indigenous experts.

“She is completely misreading where Canadians, where Albertans are on this issue, and how rightfully outraged we are,” Hoffman said.

Support is available for anyone affected by their experience at residential schools, and those who are triggered by the latest reports.

A national Indian Residential School Crisis Line has been set up to provide support for former students and those affected. People can access emotional and crisis referral services by calling the 24-hour national crisis line: 1-866-925-4419.