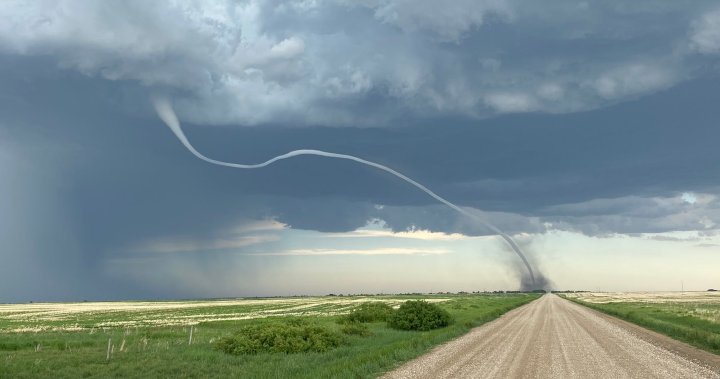 Dustin Rieger had just fueled up in Brock and was driving home when he saw a small funnel cloud in the sky.

He pulled over to grab some photos and watched as a skinny, pig-tail-shaped cloud grew longer and developed into a full-blown twister.

He quickly realized it was forming right in line with his inlaws and own family’s home.

Rieger got on the phone and made sure everyone he knew in the area got into their basement. He followed the cloud for about 15 or 20 minutes, eventually watching it touch down.

“I thought they moved fast …  but this was one of the slowest moving cells I’ve ever witnessed. It moved really slow and it wasn’t very gusty outside of it. I got close and you didn’t feel the wind. It was a really weird system,” he said.

Rieger captured several videos of the tornado touching down a few miles north of D’Arcy.

Fortunately, he said, the damage was minimal.

“It skimmed between two households … and broke one wire on the barbed wire fence and broke a post,” he said. “The only physical damage you could see is how it wiped off the crop in its path. It moved two empty bins and flopped (another) one over.”