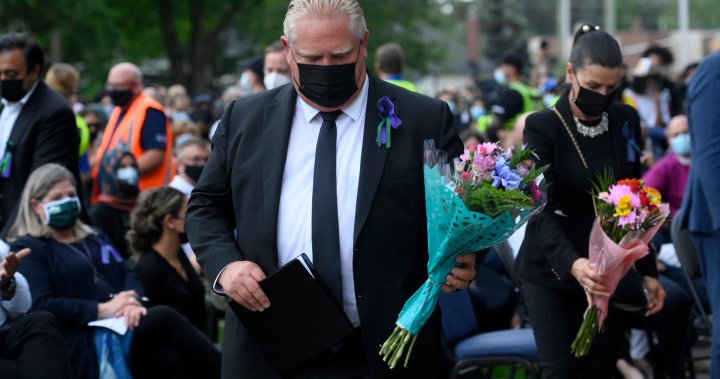 Ontario Premier Doug Ford and other provincial and local politicians condemned the fatal attack on a Muslim family in London, Ont., as an “act of terrorism” during a vigil Tuesday night.

Speaking to a crowd of thousands outside the London Muslim Mosque, Ford expressed his condolences to the Afzaal family that lost four members in what has been called a “targeted attack,” and affirmed his support for Ontario’s Muslim community.

“We are all shaken by this act where we’re left trying to understand how this could happen in a beautiful country and a beautiful province like Ontario,” Ford said.

“We know only that this awful crime was motivated purely by hatred and racism.”

Although the premier was met with boos and jeers as he approached the podium to begin his speech, the crowd cheered loudly when Ford said clearly, “This was an act of terrorism.”

“This type of racism and terrorism cannot and will not be tolerated,” he continued. “We must stand united against it.

“It must be condemned in the strongest terms, that those who commit this type of evil must and will be punished to the fullest extent of the law.”

Salman Afzaal, 46, his wife Madiha Salman, 44, and their 15-year-old daughter Yumna Afzaal were hit by a pickup truck which mounted a curb and struck the family while they were out for a walk on Sunday evening.

Afzaal’s 74-year-old mother was also killed in the attack.

The couple’s nine-year-old son, Fayez Afzaal, suffered serious but non-life-threatening injuries in the attack and remains in hospital.

Tuesday’s vigil saw several federal, provincial and local politicians speak in solidarity with the Muslim community, including Prime Minister Justin Trudeau and the leaders of every other major federal political party.

London Mayor Ed Holder thanked Trudeau and other federal leaders for attending the vigil and showing their support for the community, before reaffirming his earlier condemnation of the attack.

“This was a terrorist attack, an act of mass murder, and a grotesque expression of hatred rooted in Islamophobia,” he said.

“I’d like to ask you, my Muslim brothers and sisters, to look over your shoulders on this night. Look at the support, the compassion, and the empathy … and see that you are surrounded by love.”

Some of the strongest remarks of the night came from London city councillor Mohamed Salih, who is also Muslim.

“White supremacists and racists have been living in London rent-free for too long, and it’s time to evict them all,” he said.

“To the young Muhammads and Aishas in the city of London: London commits to you to doing everything we can to ensure that you feel welcome and safe.”

Provincial NDP Leader Andrea Horvath promised the crowd that she will “keep pushing” to ensure Ontario politicians and other levels of government act to combat Islamophobia and systemic racism.

“These hate-fueled acts of terrorism must stop,” she said.

“No one should fear walking with their loved ones on a street on a spring evening, or fear worshiping or volunteering at their masjid, or worry about their children being bullied at school. But we know it is happening each and every day in this province and it has been for far too long.

“We must admit this. That is the first step.”

Ontario Liberal Party Leader Steven Del Duca also promised action, and spent much of his remarks focused on the trauma Fayez Afzaal will continue to face after recovering from his injuries.

“I cannot help but think over and over and over again about the nine year old boy — who we hear, thank God, is going to recover from his injuries — having to wake up and try to go forward in his life, knowing that the most important anchor that we all rely upon — our families — is no longer available to him,” he said.

Twenty-year-old London man Nathaniel Veltman has been arrested and charged with murder in the attack.

At a press conference on Monday, London police said they believe the Afzaal family was targeted because of their faith.

Ford said it was everyone’s responsibility “to ensure that Ontario is a safe and inclusive all for everyone who lives here.”

“This tragedy, this brutal act of terrorism will never, ever be forgotten,” he said.