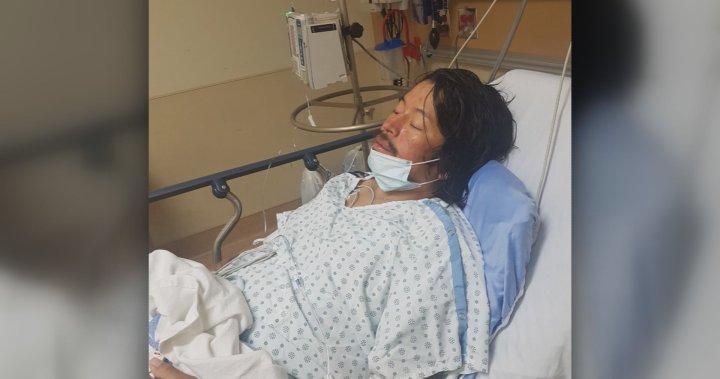 A Mount Currie mother is demanding answers after her adult son went missing from hospital in the middle of the night.

Eagle Leo was found outside was found lying on the ground semi-nude after being reported missing for nearly eight hours.

1:57
Patient with brain injury walks away from RCH

“How could a hospital lose a man who is almost six foot tall in the middle of the night only with a towel on?”

Eagle Leo was first admitted to Lions Gate Hospital on June 1 after passing out while working in the sun.

He was treated for dangerously low hemoglobin levels, then transferred to Squamish General Hospital where he was supposed to be picked up by family on Saturday.

Instead, his mother got a visit from police.

“I kept saying, ‘It doesn’t sound right. I said, ‘What did he take with him?’ And he said he didn’t take anything with him,” Andy said.

Leo has since told his mother he was given medication that left him disoriented. After showering, he tried to find his clothes and somehow wandered out of the hospital in the middle of the night.

Read more:
Police search for head-trauma patient who walked out of B.C. hospital in gown, slippers

“It was seven degrees that night that he was out there in his towel,” Andy said.

“In the rare instance in which an event like this occurs, we conduct a thorough investigation and take remedial steps, as appropriate.”

“I’m First Nations, I’ve heard many stories. It has become normalized to expect a lesser standard of care,” Andy said.

Leo said he remembers falling twice, injuring both his back and head. He also suffered bruises to his arms and cuts on his feet.

Andy said a nurse did offer an apology but she says more needs to be done to restore faith in a health-care system that she says is hard to trust right now.