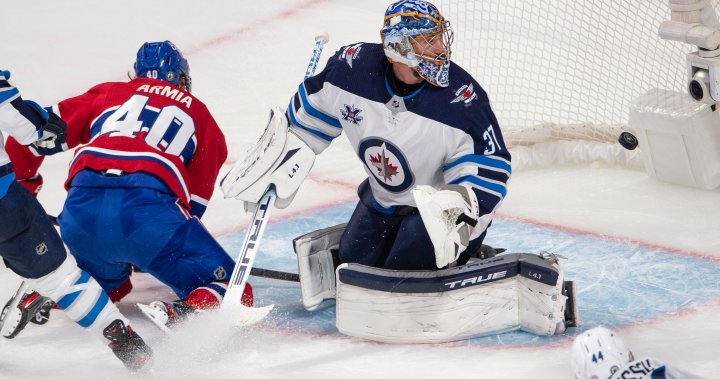 The Winniepg Jets are only one game away from playoff elimination and getting swept after falling 5-1 to the Montreal Canadiens Sunday night.

Carey Price was sensational once again, making 25 saves and only allowing a single goal.

Connor Hellebuyck turned aside 28 pucks while allowing four goals at the other end.

Adam Lowry potted Winnipeg’s lone goal at the end of the second period on a beautiful pass from Matthieu Perreault.

Montreal had an overly impressive second period, outshooting Winnipeg 15-6 and outscoring them 2-1.

Just over a minute into the game, Blake Wheeler took a beautiful stretch pass from Kyle Connor, right into Montreal’s zone, and fired a wrister just wide over the top left corner.

Read more:
‘Special’ Winnipeg Jets game ends in loss but sees first fans in downtown arena in over a year

The miss proved costly, as Corey Perry opened scoring for Montreal 4:45 into the game at the other end.

After some sustained o-zone time, Perry picked up a loose puck behind the Jets’ net and snuck his way in front before picking the far corner on Hellebuyck. 1-0 Habs.

The game’s first penalty went to Winnipeg’s Josh Morrissey (hooking) after the defenceman caught his stick in the chest of Phillip Danault.

The Habs were unable to capitalize on their first powerplay after going 1-5 through the first two games on the man advantage.

Andrew Copp, still in search of his first playoff goal, was robbed on a wide-open one-timer by Price following a terrific feed from Nikolaj Ehlers.

Price made seven saves in the opening 20 minutes, keeping Winnipeg off the scoreboard.

Hellebuyck stopped nine pucks at the other end and got some major blocking help from his team, with the Jets getting in front of 11 Montreal shots in the first period.

Montreal rookie Cole Caufield had two dangerous slot chances within 30 seconds at the beginning of the second period.

Hellebuyck deflected the first one aside with his chest and stretched out to make a beautiful glove save on the second one.

After a ferocious Montreal start to the period, Winnipeg’s Nikolaj Ehlers lasered a wrist shot through traffic and off the cross bar.

Moments later, Blake Wheeler created some space for himself and beat Carey Price with an extremely patient wrister. But he couldn’t beat the cross bar, either.

The missed chances would prove costly for Winnipeg once again.

A shot circus erupted in front of Hellebuyck after making the initial save on Phillip Danault, but Artturi Lehkonen was there to bang home the third rebound, giving Montreal a two goal lead.

The Jets’ picked up an ounce of momentum after Montreal got called for too many men on the ice, marking their first powerplay of the night. But that momentum couldn’t have disappeared fast enough.

Paul Stastny gave the puck away in the offensive zone to Joel Armia, creating a shorthanded 2-on-1 with Paul Byron. Armia waited until he was right in the slot and beat a diving Josh Morrissey along with a stunned Connor Hellebuyck. 3-0.

To make matters worse, Stastny followed through on a cross-check to Armia after the shot and was sent to the sin-bin following the goal.

After killing the penalty, Mathieu Perreault flicked a centering pass from the Montreal far corner and it landed right on the tape of Adam Lowry just steps away from Carey Price. Lowry snapped a one-timer over Price’s right pad for his second of the playoffs.

Despite the late goal coming at 17:51 of the second, the Jets took to the locker room down 3-1.

A rather uneventful first half of the third period came to an end with Paul Stastny being sent to the box for high sticking on Shea Weber.

Eight seconds into the powerplay, Caufield fed Nick Suzuki right in front of the Winnipeg crease and he slipped it through the wickets of Hellebuyck.

Montreal would add an empty netter courtesy of Joel Armia and take game three by a score of 5-1. They’ll carry a 3-0 stronghold on the series into game four.

The two sides will go right back to battle in the second half of the series’ only back-to-back Monday night.

Paul Edmonds and Jamie Thomas will have the call on 680 CJOB with Kelly Moore hitting the airwaves for the pre-game show at five o’clock.