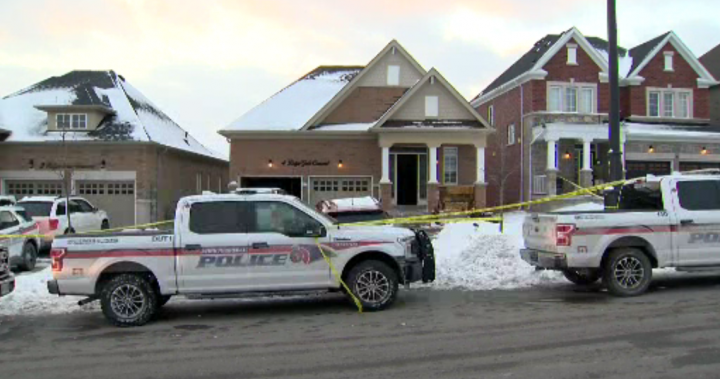 Ontario’s police watchdog says two officers who shot and killed a man who stabbed several people, including his two children and wife, at an East Gwillimbury home in February acted lawfully.

The Special Investigations Unit released its report of the Feb. 6 incident on Saturday, which provided further insight into what transpired at the home on Ridge Gate Crescent in Mount Albert.

The SIU said at about 2:33 p.m., the first officer arrived at the scene, at the same time as a paramedic.

Both approached a woman who had been stabbed and was lying on the driveway of the home behind a minivan. The woman, who is the suspect’s sister, told the officer that the suspect was inside the home. The officer went to the front door, passing by a deceased woman — the suspect’s wife — on the porch, the SIU said.

The officer opened the unlocked door with a gun in his hand and saw the suspect in the hall several metres away, according to the SIU.

After seeing the officer, the suspect — holding a two-year-old child who had been stabbed — screamed at the officer to kill him. The officer said he did not want to hurt him and asked for the child to be put down, but the suspect continued to ask to be shot, the report said.

The report said the suspect hit the child’s head against a wall and later ran into the kitchen where he was seen with a knife in his hand and made stabbing motions towards the child “which never connected, as if trying to provoke [the officer] into [shooting] him.”

The suspect moved into a bedroom and a second officer — also with a gun drawn — joined the first officer. The suspect then walked up to the foot of the bed where his four-year-old son was kneeling and stabbed him, the report said.

The SIU said that as the man straightened himself up, the second officer fired two shots at the suspect, who then fell onto his back. The second officer moved to get a hold of the four-year-old child, who was carried out to paramedics.

Seconds later, the first officer fired two additional shots into the chest of the suspect who had made a movement towards the two-year-old child lying on the floor next to him, the SIU said. The officer then took the child outside to paramedics.

The children and injured woman survived. The suspect — a 37-year-old man — died at the scene.

The full SIU report can be found here.

The SIU is an independent agency that investigates incidents involving police that have resulted in death, serious injury or alleged sexual assault.