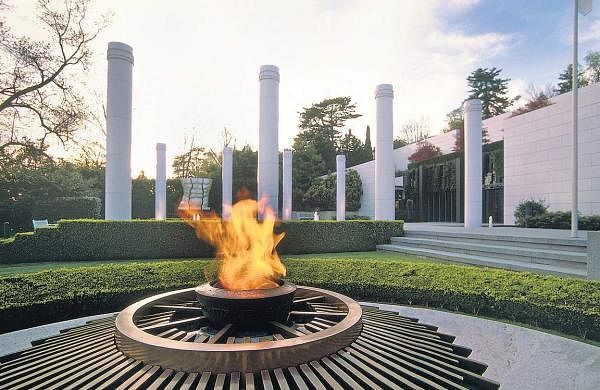 As I walk up the steep steps to the front entrance, I pass graceful statues that show the human body in its perfection. An athlete with a finely toned body and rippling muscles holding a discus, a pair wrestling and another getting ready to sprint. Each step has the name of an Olympic torchbearer carved on it.

Surrounded by over 8,000 square metres of meadows and outdoor space overlooking Lake Geneva and the picturesque Swiss Alps, the Olympic Museum in Lausanne was created in Ouchy in 1993 and was renovated in 2013 for £36 million. The fire that burns eternally in the cauldron by the museum’s entrance harks back to the ancient origin of the Games.

I am in Lausanne, called ‘Olympic city’, due to the International Olympic Committee’s headquarters. It took 23 months to renovate the Olympic Museum and expand the collections and exhibition spaces. With over 1,500 items in the permanent collection, 53 video projectors and 50 interactive screens, the museum heralds a digital revolution in the museum world. On the top floor is the TOM café, one of the most sought-after terraces in Lausanne, with spectacular views of Lake Geneva and the Alps.

The museum explores the Olympics narrative across three sections: Olympic World, Olympic Games and the Olympic Spirit. Visitors ascend the spiral ramp and begin their visit at the top level, from Olympic World and the ancient games at Olympia; through their revival by Pierre de Coubertin in the late 19th century and to their present stature. The Olympic Museum honours Coubertin, a French educator and historian who had a vision of a world in which sport would play a role, uniting humanity and fostering respect.

The museum is an interactive space with touch screens and games. This section displays the first Olympic flag made by the department store Le Bon Marché in 1913, and a full set of Olympic torches. Touch a screen and you can access the name of its designer and the details of its journey from Greece.

I walk past wraparound screens showing high points of opening ceremonies, displays of torches and how they reflected characteristics of each country. The section also explores elements such as mascots or visual identity for each Olympic Games. There are 3D models of stadiums highlighting the stunning work of urban planners and architects.

The subterranean basement floor looks at the Olympic Spirit and explores the daily lives of athletes before, during and after the Games—how they train, what they eat, how they relax—and offers a window into their lives, dreams, values and the challenges involved in pushing their limits. In over 200 filmed interviews, the athletes tell their stories and anecdotes about their career and daily life. Technical achievements are not forgotten either. The infamous phenomenon of ‘doping’ also has its own section. There are also machines where, for example, you could test your own prowess at the skiing and shooting event, or gauge your reactions or test your sense of balance. The visit ends in front of the gleaming medals of the modern era (the 60 medals from the Games of 1896 to the present), the ultimate Olympic symbol.

The museum’s main strength lies in its fully interactive, creative and engaging design. I unearth a lot of fascinating facts behind each host city and the story of its Olympic adventure. It makes me appreciate the effort that goes in the training and practice year after year. Seeing the inspiring and dramatic multimedia displays of opening ceremonies and listening to the captivating speeches only reiterate what Pierre Coubertin once said, “The most important thing in the Olympic Games is not winning but taking part; the essential thing in life is not conquering but fighting well.”

Calgary police are investigating a fire that left residents out of their homes overnight, and that officers say is considered suspicious. Firefighters were called...
Read more
World

Calgary police are investigating a fire that left residents out of their homes overnight, and that officers say is considered suspicious. Firefighters were called...
Read more
World