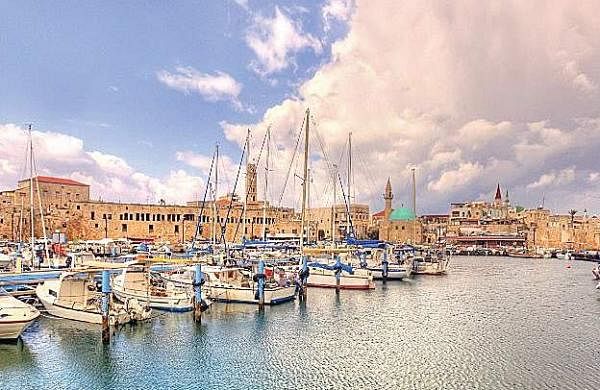 I navigate the charming streets of Akko (Acre), a city in the Galilee region of northern Israel, entranced by a landscape frozen in time. High-walled alleys, underground passages, Turkish baths, a Templar tunnel and ancient archaeological sites create a mesmerising tapestry. Add to the smorgasbord of fascinating museums, pristine beaches fringed by an aquamarine sea, a picturesque fishing port, and it figures why UNESCO declared Akko a World Heritage Site in 2001.

Perhaps more than any other city in Israel, Akko is the perfect showcase of Israel’s tumultuous history. Ruled by the Romans, Ottomans, Crusaders, Mamelukes, Byzantines and the British, it is peppered with remains from medieval crusades, the Ottoman Empire and ruins below street level, which famously make it ‘a city beneath a city’.

“Akko exists both above and below street level, providing an exceptional glimpse into the medieval kingdom,” our guide Tami tells us while we snap photos with frenzy. “It’s an important example of an Ottoman walled town with citadels, mosques and baths built on top of underlying Crusader structures.”

Akko—the perfect meeting ground for the East and the West, new and old, beauty and ruins—is one of the most important cities of the ancient world. An eclectic population—Jews, Christians and Muslims—have been living, working and trading here for centuries. So enamoured was Napoleon Bonaparte by Akko’s cultural wealth that he tried capturing it in 1799. But after two months of siege and several botched attempts to storm the city’s walls, he retreated in humiliation. Boats and weapons used in his naval battles—many of which have been retrieved from ocean beds over the years—are now showcased in maritime museums.

Once a fortified town in the 11th century, much of Akko’s caché came from being a pivotal port city in ancient times and a docking point for hundreds of sea vessels ferrying soldiers, horses and supplies. The port has dominated northern Israel as a strategic trading stop for centuries.

A good way to get an insight into the personality of a place, they say, is through its markets. Akko’s al fresco food market, cosseted between labyrinthine alleyways, is rife with energy. When I visit it one early morning, it is brimming with a cornucopia of vibrant produce—shiny vegetables, luscious fruits, olives, dates, nuts, spices, sesame halva, breads… Nearby, in the fishing port, there are excellent fish restaurants serving the freshest catches. Not far away from the city is a beautifully manicured Bahai Garden, its paths and meticulously-designed flower beds providing sensual pleasure.

Among Akko’s many exciting findings is the Templars Tunnel, discovered in 1994. The Templars, explained Tami, were knights originally stationed around the Temple Mount in Jerusalem who guarded Christian pilgrims from Muslim attacks. In the 12th century, they moved to Akko and built this secret tunnel to get from the port area in the east into the fortress in the western part of the city in time of battle.

Up next, we visit The Hammam (Turkish Bath)—a unique city attraction—which, we’re told, was far more than just a bathhouse. It was the favoured venue of the rich and the famous to gossip, network and plot coups. As we exit the Hammam, the hubbub of a colourful and noisy shuk (market) fronted by a blustery sea engulfs us. We walk along the seafront atop the ancient city’s walls, watching the shimmering sea, and fishermen’s boats bobbing up and down in the marina. Waves from the Mediterranean Sea crash against the walls of Akko’s old city, washing its centuries-old rugged sandstone with liquid silver.

Tap N Pay Your Way Through Your Holiday